Two students, Gerardo and Jonas, are in love. However, Jonas becomes obsessed with another boy, which leads to Gerardo moving into arms of Sergio.

Like João Pedro Rodrigues (Two Drifters), Mexican filmmaker Julián Hernández makes obsessively gay films – unlike Almodóvar, whose outlook may be gay but who has achieved almost universal acceptance through his varied milieus, intricately amusing plots and use of women in prominent roles (not to mention his general brilliance as a filmmaker, which neither Rodrigues nor Hernández has yet established). Hernández’s sphere is even more narrow than Rodrigues’, but more emotionally accessible and less odd. Influences include Cocteau, Pasolini, Wong Kar Wai and the Duras/Resnais collaboration of’ Hiroshima mon amour, a line from which is quoted as an epigraph. Unlike Rodrigues’, this filmmaker’s few characters are not oddballs or obsessives but simply prettier-than-average middle-class Mexico City young men oppressed by love-longing. Like Hernández’s previous feature A Thousand Clouds of Peace (2003) in its preoccupations but with higher production values, the subject is a young man whose love object eludes him. Two female characters are barely more than glimpsed in passing. We’re examining a gay love affair and nothing else. These are students, but don’t ask what their majors are. They spend more time in discos than in classrooms.

As in the previous Hernández feature, plot and dialogue are minimized. There are voiceovers but the characters rarely speak. We get used to their miming their feelings. Gerardo (Miguel Angel Hoppe) picks up Jonas (Fernando Arroyo) in a playing field at the university and the passionate kisses and embraces and the sex begin right away. Then Jonas starts averting his face when Gerardo tries to caress or kiss him. And yet they’re still regularly sleeping together. Gradually a third person enters the picture – Sergio (Alejandro Rojo), a slightly older man, a tall, dark, brooding fellow, even easier on the eyes than the other two. He has already watched the pair play hide and seek in the library stacks when he was installing a light bulb. Sergio has wanted Gerardo for a long time, or so he says when they finally get together after one of several encounters in a gay-friendly club – in this film, everywhere is gay friendly. Scenes take place either around the university, in the guy’s rooms, or in a club; all problems other than love are minimized or eliminated. Except for some yellow filters, the photography is pretty, but straightforward. None of Wong Kar Wai’s richly grungy pads here: the rooms are conventional middle-class housing, with tasteful prints on the walls and textbooks on the shelves, not palatial but posh for students’ digs. The guys only have a few pairs of jeans, but they sure have lots of shirts.

The message that the film conveys – and though it is too long, it’s basic idea works; the scenes convey the desired feelings and the editing is seamless – at first is that two people never seem to love each other at the same time to the same degree in the same way.

But the ending is a happy and romantic one. Once Sergio and Gerardo are a couple, Jonas begins to long for Gerardo again, and in the final scene, they’ve gotten back together.

Broken Sky is more like a poem or an opera – or most of all, a dance – than a conventional film. It’s a different experience. The mainstream audience would never put up with all this gay sex without dialogue or plot. Not every gay man will have the patience to watch these amorous comings and goings for the full 140 minutes, either. I’m not sure that the poetic voiceovers were necessary; and a third of them are lost to non Spanish-speakers because the white-on-white subtitles are illegible. They are a bit too poetic and general. The boys are too specific to be so generalized by the language. Needless to say, “the real world” is beyond the range of Broken Sky. But there’s no denying that Broken Sky in its own way is unique and beautiful. The director achieves what he was clumsily groping for in his first one. He is using cinematic language in a way that it rarely is any more – he achieves the instinctive identification and emotional directness of the silent film. Broken Sky makes you think about the unspoken element in any relationship, the things that can never be communicated in words: in short, the world of eroticism and feelings. Hernández contributes to the effectiveness of his visual poem through excellent use of various musical accompaniments, a few notes on a clavicord, a string quartet – above all, a sweet pop love song – the lyrics of each lovingly translated in subtitles. It’s as if Gerardo and Jonas were trying to live a pop song. And I guess that’s what moony young gay guys do a lot of the time. There’s even a coloratura operatic aria; considering the operatic tone of things, the filmmakers exercise great forbearance in using only one. Maybe this is “a new cinematic language,” as was said of Antonioni’s L’Avventura. For a while one can savor it, admire the naive sweetness of it. But can anyone read it? And can it say more than one thing? 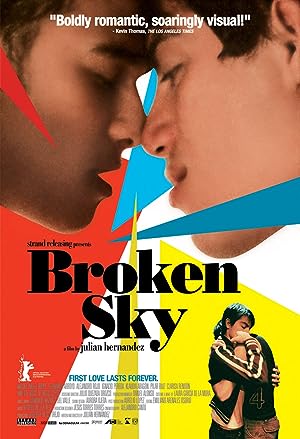