Bilbao, 1980. A right-wing Civil Guard Commander discovers that his 17-year-old son Paco, who he hopes to enter Military Academy, is a heroin addict like Urko, Paco’s best friend and the son of a leftist leader. Paco runs away from home taking a gun from his father. While the Commander initiates the search of his son accompanied by the father of Urko, he begins to discover an unknown world and little by little important changes take place in him.

Interesting and thought-provoking look about youthful delinquency , drugs and terrorism in Spain from the 80s . Intelligent , shocking and thrilling film based on facts about juvenile delinquency in north of Spain . It deals with a duo of inseparable friends turned delinquents named Paco(Jose Luis Manzano) and Urko (Javier Garcia) , together they share drugs . They are forced into street hustling and ever-expanding life of crime . Paco is son of a stiff Guardia Civil Commandant (Jose Manuel Cervino) and Urko of an Aberzale Congressman (Luis Iriondo) . The protagonists choose to live dangerously and they are forced to take a life of crime to survive and attempt to flee the suburbs of Bilbao . Paco hag out with Betty (Lali Espinet) ,an Argentinian whore who deliver them heroin . Paco also hags out with a gay sculptor (Enrique San Francisco) who helps him . Both of them scheme and carry out robberies to earn money in and around Bilbao , Baracaldo and Neguri slums . So, they’ll have to gather some money and in order to get drug mainly heroin and anything that’s necessary to obtain it . The young junkers in Bilbao embark on an armed robbery to raise the money that they use to rise their existence . As they attack a drug-runner named El Cojo (Ovidi Montllor) and his wife (Marta Molins) and the events get worse .

¨El Pico¨ is one of several movies dealing with youth delinquence in Spain during the 70s and early 80s along with ¨Perros Callejeros I and II¨, ¨ Los ultimos Golpes Del Torete¨, ¨Yo el Vaquilla¨, mostly realized by Jose Antonio De La Loma , ¨Navajeros , “Colegas”, “El Pico 2” and especially ¨Deprisa , Deprisa¨ by Carlos Saura and later ¨La Estanquera De Vallecas ¨ , among others . These films were notorious in the years of the Spanish transition to democracy including provoking and polemic issues and played by unknown young people . His style is pretty much urban and realistic as well in the atmosphere as in the fresh dialog and attempted to take a position in favor of outcast people . Drugs , delinquency, and generational problems are the habitual subjects in these films and specially dedicated to the underworld of heroin and a very realistic look at drug addiction . Passing of time hasn’t had mercy with most of those movies , but they represented a time and a way of life in the history of Spain ; and now they may seem a little bit naive . In ¨El pico¨ we watch the day-by-day of a duo of delinquents committing violent crimes , however Eloy De La Iglesia got to make a both lyric and documentary-style flick . A great look at young life and friendship in the margined side let the story flow efficiently and being realized in realistic style . We see their troubles growing in such streets , slums or “barrio” from Bilbao and outskirts as Baracaldo and Neguri and some fine locations . The director creates a sort of Spanish Neo-Realism by tackling the juvenile delinquency in the Bilbao streets from a sociological point of view . Eloy De La Iglesia shows the ugliness of those “barrios” , toughness and cold existence . The screenplay by Gonzalo Goicoechea is such strong with disagreeable events , including lots of nudism , violent scenes , though also with some ingenuousness , but in 1980, a few years after General Franco died it wasn’t naive at all. Eloy De La Iglesia chose young and natural actors as Jose Luis Manzano and Javier Garcia who play their part to the hilt , unafraid of filmmaker’s unsympathetic camera and the particularity of the characters . Passable photography with juicy atmosphere by Hans Burman , deemed one of the best Spanish cameraman , but unfortunately turns too much murky in some video print , being necessary a a correct remastering . Followed by another surprising sequel ¨El Pico II¨ with same actors and director .

The motion picture is professionally directed by Eloy De La Iglesia though with some flaws and gaps . De La Iglesia is a good Spanish movies director , he began working in cinema in 1966, though he became notorious in the years of the Spanish transition to democracy with shocking and polemic films as ¨El Pico 1 and 2¨ , ¨El Diputado¨, ¨The priest , ¨Clockwork terror¨ , ¨La Otra Alcoba¨ , ¨El Techo De Cristal¨, ¨La Semana Del Asesino¨ , and after ¨Bulgarian lovers¨ and many others . Drugs, delinquency, terrorism and generational problems are the habitual subjects in his films , and specially dedicated to the underworld of heroin ; as well as the gay world . With the passing of time hasn’t had no mercy with most of Eloy’s movies, but there they are : they represent a time and a way of life in the history of Spain ; and now they may seem a little bit ingenious . As Eloy De La Iglesia chose young and natural actors Jose Luis Manzano , Pirri, or Quique San Francisco were the usual ones . All of them early deceased by drugging , including the filmmaker . Rating : 5,5 , Acceptable and passable. 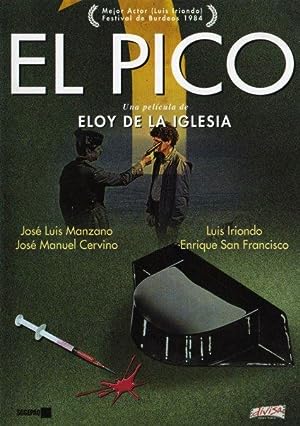