13-year-old Pablo is a quiet, lonely boy with a troubled past. His only friend is Julia, a shameless 15-year-old girl who is more than willing to help Pablo with his transition from childhood to adolescence, and give him some advice on sex, love and life in general. On a quiet country road just outside of the village, Pablo meets Paco, an oddly calm, well dressed stranger whose car just broke down. Nevertheless, he seems more interested in the boy than fixing his problem. At first Pablo maintains a cautious distance from the stranger, vaguely heeding his fellow villagers’ advice to keep his distance. However, the boy’s subconscious quest to find understanding of his dark past and guilt makes him lose all of his protective layers. He sees a new friend in Paco; someone he can open up to and feel valued by almost like a replacement father. As Pablo’s affection grows for the man, he is unknowingly and blindly being lead toward a tragedy that will scar him for life

The film “En tu Ausencia” is the debut of composer/filmmaker Iván Noel. I have personally witnessed from relatively close by the ongoing battle to get this film shot, edited and distributed and I can bear testimony of what a nightmare the process has been for Noel. He sold his house and used the money to make the film (and not starve whilst at it), but this is only a minor detail compared to all the disasters that befell on his way to having a feature film under his belt. If I had known, I would have shot a “making of”, which would have compared well with “Lost in la Mancha”, the main difference being that “Ausencia” finally made it to the theaters and on DVD’s. And what justice is being done by allowing people to see this film! How talent and perseverance have resulted in a lush and utterly moving work of art. Where Almodovar captures from within the decadence and surrealism of Spain’s capital Madrid, Noel has fallen in love with down to dry earth Andalusia. He offers us a unique and intimate view of real Andalusian people in their isolated world, while at the same time touching upon universal themes such as friendship, parenthood, coming of age, sexuality and betrayal. Set in the Arcadian landscape of springtime Southern Spain, the local actors (most of them young first time performers) behave as their own nature dictates, within the parameters of the story, closely directed by Noel. It is here that Noel excels: the visuals of the film are well above average of most Hollywood shows, the story is ingenuous and captivating, but the performances of the actors drawn out by intense direction are so direct and real that they touch the viewer as if he were participating in the story. Music (composed by Noel, who started pro life as a musician) beautifully accentuates and supports emotions evoked by the scenes, where impressionist images are followed by starkly realistic ones, although the film always draws upon our own imagination and experiences to complete the picture. A highly original film! 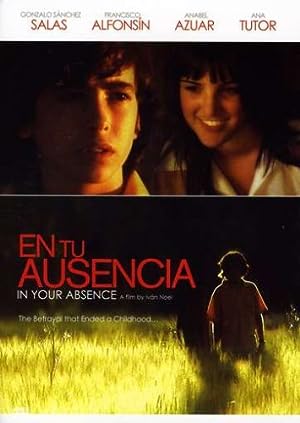 In Your Absence (2008)
95 min|Drama|23 Dec 2008
6.2Rating: 6.2 / 10 from 751 users
A fatherless boy whose fixation on a mysterious stranger leads him blindly into a tragedy that is to mark him for life.
Director: Iván Noel
Creator: Iván Noel (screenplay)
Actors: Francisco Alfonsin, Pedro Salido Saborido, Gonzalo Sánchez Salas, Anabel Azuar