When thirteen year old Aharon,is selected for the great honor of carrying the big Torah book around the neighborhood in ‘Simchat Torah’ celebrations, he feels life is finally about to change for the better. But his selection causes age-old tensions between his parents to surface, and the symbolic happy ritual becomes a life-threatening struggle.

I came to this movie wondering if I have patience to watch many of the usual character actors once more in yet another comic drama about a close-knit, down-at-heel neighborhood of colorful, superstitious first- and second-generation Israelis from Arab countries. But it’s a different, original movie and well worth watching. There is a remarkable group of well-differentiated and well-acted child characters. Chief among them is Aharon, who has inherited from his father a heavy dose of hard luck and a defiant sense of dignity. Everyone in the script seems strongly motivated, and when their motivations aren’t colliding with great energy, they’re underlined by warm understanding. Parallelling the gang of kids is an almost equally magnetic gang of old people, and in the middle is a couple with a troublesome void in their marriage. Everyone is, of course, “encircled” by hardships and dilemmas and such, but the encirclement that the Hebrew title emphasizes is the hefting of the Torah scroll around and about the synagogue on the Simhat Torah holiday. The script can perhaps be forgiven (and perhaps not) for portraying a community that anomalously sings a Yom Kippur song on Simhat Torah. Folk beliefs about the Torah-carrying ceremony drive the central plot, up to a culmination that may disappoint some viewers (but far be it from me to spoil an ending). 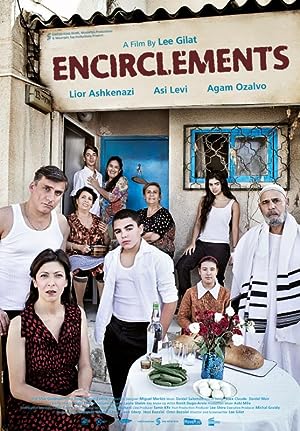