Eu Me Lembro 2005 with English Subtitles

The memories of Guiga, from early childhood to young adulthood: his family, relatives, friends, fears, dreams and reality in a still provincial city of Salvador, Bahia, from the 50s to the 70s.

Brazilian director Edgar Navarro remembers his life as a boy, a youth and a somewhat man in rural Bahia.

While this film is lovingly shot–as only such autobiographical films such as this tend to be written–the themes and memories depicted in this film meander to the point of misdirection.

The man’s early life stands out in the film clearly for its use of archetypes, as in the mother and, particularly, depiction of the father. Guiga’s father is as many Brazilian fathers were, as my own familial history illustrates. It’s just that the filmic representation of this personal history seems mired in cliché, and even what seemed a sort of confused plagiarism.

The depictions of Guiga’s sexual development were equally cute and bizarre, and there were a few moments of genuine hilarity–as in a menopausal tribute to Brasil itself–but the familial imagery wears thin and Guiga’s personal development isn’t at all inspiring or passionate; this seems a man’s nostalgic vision of himself having a perfectly normal and uneventful life.

The visual and thematic ties to the factual history of Brasil also confuse, for as soon as their reality grip the viewer, so do the questions one asks regarding their inclusion in the film. Navarro ‘remembers’ the military takeover of the Brazilian government and subsequent revolution attempts, but only for a brief moment. These events are not portrayed in any certain depth, and their inclusion without adequate thematic or historical explanation will most probably confuse or in their brutality irritate most non-Brazilian audiences.

And concerning Guiga’s personal response to the events that occur around his life–and I must emphasize the use of ‘around’ here, as Guiga himself takes not a step toward actually involving himself in historic circumstance–I must say that I’ve seen it all before, and once again I’m speaking from personal experience.

I mean: I’ve seen drugs done on cinema. I’ve seen them done on cinema much better–Hell, I’ve DONE better drugs than this film. And as the final bizarre hallucination unreeled–in all its Fellini Glory–I couldn’t help but wonder, “why?”.

I hoped that I would enjoy this film, but the ending really changed what had come before. Navarro’s inclusion of the ending from 8 1/2–sem musica theatrica–seems really tacked-on, as if Navarro himself was confused to the true purpose of the memoir. 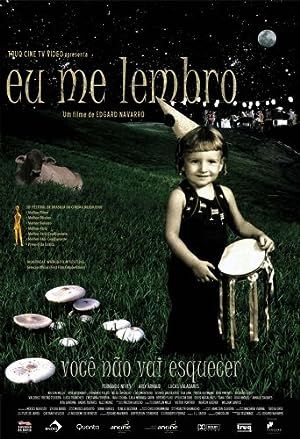 16 reviews for Eu Me Lembro 2005 with English Subtitles