Expulsion from Paradise 2001 with English Subtitles

Nothing seems to go right for Rosta, a film director who is shooting a movie called “Paradiso” at a nudist beach. Rosta finds trouble in paradise from day one as he continually clashes with the crew, actors, and his wife.

This movie involves many hidden layers. It is basically a philosophical movie, staged at the least philosophical environment imaginable: A closed scenery of a nudist spot, where some hired Czech stuff is making a plain erotic movie for a rich Russian producer. Nothing in this movie is what it seems to be at the first superficial glance. The story is just a patsy. Naked relationships and sampled philosophies of all those people are symbolized by all those naked people themselves. It is rather a movie how to make some sense out of a nonsense. About boundaries, differences and similarities between reality and staged pseudo-reality. Everything culminates in last climactic scenes, when neither directors nor actors and viewers are sure if the death is real or just a part of the movie plot. A key to the whole story is perhaps in its very last sentence: “When I imagine that this Earth is flying in the Universe … those people are perhaps not even realizing that…” 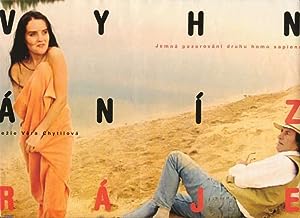 6 reviews for Expulsion from Paradise 2001 with English Subtitles