There seems to be a general rule of thumb now that a “Movie” franchise film is only really half-decent if Aaron Seltzer & Jason Friedberg aren’t involved with the production. The good news then, is that in this case, they weren’t. The people behind “Extreme Movie” are the same people who brought you “Not Another Teen Movie” which is one of the better spoof movies of recent years.

This is not the kind of movie you’d let grandma watch. It’s not really the kind of movie you’d want your parents to catch you watching either, but it is perhaps the sort of thing teenagers would watch as a ‘Date Movie’. It’s juvenile and full of sex and fart jokes, not to mention a fair bit of nudity, so its not really for the easily offended. A film about teenagers and sex is by its very definition going to be a bit raunchy. At the grand old age of 35, maybe I’m getting a bit long in the tooth for these kind of teen ‘High School’ movies, but I do like comedy and spoof films so am always prepared to give stuff like this a chance, and I did find a couple of parts of this film quite funny and I did laugh. Also for once, I was disappointed that the film came to an end after just over seventy minutes – unlike with the ‘Epic’ and ‘Disaster’ movies, my brain cells weren’t starting to fry and I could easily have sat through more of the same.

This is not a movie in the normal sense of the word but a series of skits with the common theme of teenage sex. Personally, I liked the guy who went to the wrong apartment by mistake dressed in a mask to act out a kidnap fantasy with a girl he met online – “Did anyone order a rape?” – it just cracked me up for some reason – not sophisticated by any means, but funny. This is definitely a film for the Lads rather than the ladies though. 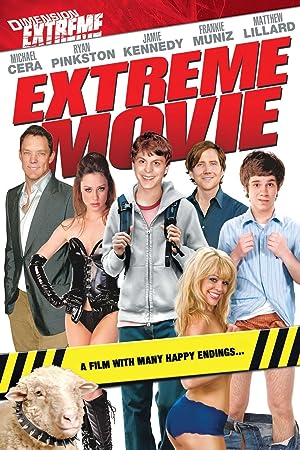 Be the first to review “Extreme Movie 2008” Cancel reply