Once upon a time, upon moving into the run-down Spiderwick Estate with their mother, twin brothers Jared and Simon Grace, along with their sister Mallory, find themselves pulled into an alternate world full of fairies and other creatures. Unable to explain the strange disappearances and accidents that seem to be happening on a daily basis, the family blames it all on Jared. When he, Simon and Mallory investigate what’s really going on, they uncover the fantastic truth of the Spiderwick estate and of the creatures that inhabit it.

Spiderwick Chronicles is a dark delight of Harry Potter-type goblins, ghouls, and griffins with violence enough to make it a howler for the nine year old but a sleepless night for the seven.

Arthur Spiderwick decades ago wrote a private field guide to faeries, a much sought after tome by gremlins who hate them.

Besides the usual CGI gymnastics is the now common dad-is-gone-by-divorce-and-mom-isfrazzled motif, along with the usual nobody-believes-me-but-I-can-see-them suspense builder. The production design of the old mansion is Psycho-worthy, and the ever serviceable James Horner provides the right chilling music.

Not to be missed, however, is the shape-shifting leader of the baddies played by Nick Nolte, whose freaked out visage eclipses the shock of his infamous California mug shot. 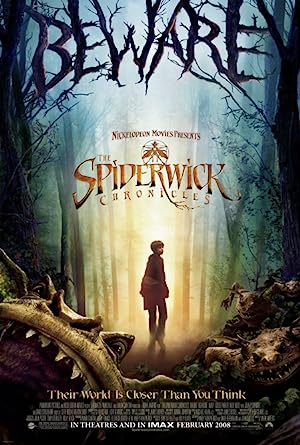 1 review for The Spiderwick Chronicles 2008