Screened in over 75 international film festivals (including the 2004 Tribeca Film Festival), “Fairies” is a musical fantasy come true. Timothy is bullied by homophobic classmates at his all boys high school. While studying A Midsummer Night’s Dream, he imagines a world where he isn’t so different. With the help of Midsummer, his quirky teacher, a spectacular musical dream and tons of glitter- he creates a way to fit in.

It opens with a gay boy being bullied by his horribly homophobic classmates (except for one). Even the gym teacher goes after him. However in his drama class he excels. They’re doing “A Midsummer Night’s Dream” and will perform it on stage. He’s playing Puck. Then, while performing it, he imagines it as an elaborate fantasy. He’s singing (a great voice BTW), the rest of the cast joins in and then they start to dance! And he gets the man of his dreams at the end (almost). The songs are great, the singing good and some pretty good dancing too. There’s also a hysterical closing scene with the gym class. All in all a very strange but satisfying feature. All gay teenagers should see this film. 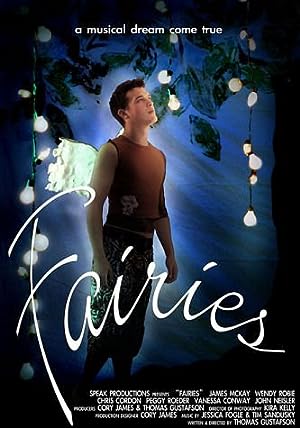 Be the first to review “Fairies 2003” Cancel reply