Home » Movies in English » Family Portraits: A Trilogy of America 2003

Family Portraits: A Trilogy of America 2003

From acclaimed director Douglas Buck comes an unflinching, disturbingly beautiful look at the underbelly of American family. Three separate narratives (including the shocking film festival favorite “Cutting Moments” as well as “Home” and “Prologue”) combine to create a unique trilogy of life today that will leave you devastating… and begging for more.

An excellent trio of short movies, which can be viewed individually or together as one complete piece — on the DVD, the choice is yours. The first, “Cutting Moments”, is the most graphically brutal of the three. It explores a relationship where a woman no longer feels that her husband has any interest in her. To feel some sort of a connection with him again, she horribly mutilates herself. This is a hard one to watch. It may repulse some viewers, but it’s shocking for a valid reason, but just for the sake of it.

The second short, “Home”, is similar to the first, only with less visual horrors on display. It’s about a man who wants desperately to be normal, but whose upbringing leaves him with little hope of achieving the quiet middle ground he so craves.

The third, “Prologue”, is the longest, subtlest and most assured of the three pieces. It follows the recovery of a young woman who has lost her hands in a recent accident, and slowly, artfully fills in the gaps, explaining what has actually happened.

These films deserve a much wider audience than they’ve currently enjoyed. Buck is one of the most interesting directors to emerge in recent years, and hopefully he’ll get the chance to work on a larger canvas soon. In the meantime, do whatever it takes to track these works down — I’d class them as essential modern viewing. 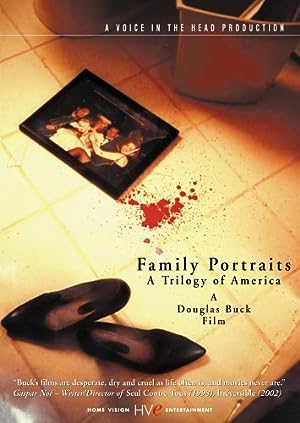 Be the first to review “Family Portraits: A Trilogy of America 2003” Cancel reply