Farewell My Concubine 1993 with English Subtitles

“Farewell, My Concubine” is a movie with two parallel, intertwined stories. It is the story of two performers in the Beijing Opera, stage brothers, and the woman who comes between them. At the same time, it attempts to do no less than squeeze the entire political history of China in the twentieth century into a three-hour time-frame.

The film paints the story of two actors, from their first encounter at school in the Twenties through their success as stars of the Peking Opera, difficulties during the Japanese occupation, the Communist takeover in 1949 and the traumas of the Cultural Revolution in the Sixtiesxc2x85

For the so-called Fifth Generation of Chinese filmmakers, the film touches new ground on two frontsxc2x85 In the first place, though it does not avoid from acknowledging the sufferings under the old regime, it takes an embittered view of Communist society and of the Cultural Revolution specificallyxc2x85

The two friends, Xiaolou and Dieyi, adopt a young man, Xiao Si, who becomes one of the Red Guards and quickly informs the political sins of his benefactorsxc2x85

Second the film is a love story of a rare kindxc2x85 Dieyi is a homosexual and suffers rejection when Xiaolou begins an affair with Juxian (Gong Li), a gorgeous prostitutexc2x85 The personal conflict of each character is the heart of this exceptional movie 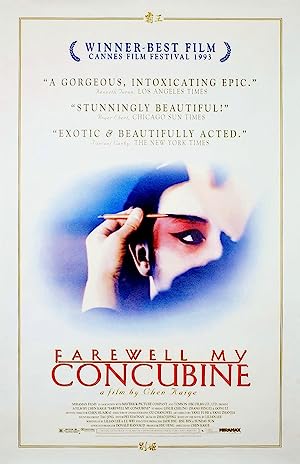