How the pursuit of an Indian cricket legend’s Ferrari makes a young boy’s dreams of playing cricket at Lords a reality.

To start with FERRARI KI SAWAARI may not be a perfect film since it does have its flaws including its over length and few avoidable scenes & songs. But ignoring its weak points the film is indeed “One of the Best FAMILY movies of 2012” which even reminds you of another perfect family entertainer, 3 IDIOTS presented by the same production house.

The film obviously revolves around the subject of Cricket and A Ferrari, yet it’s not entirely a SPORTS movie as you might be thinking. On the contrary, it is a film based on relationship between a father, a son and a grandfather. In poetic words it’s a film based on cricket where the team consists of only 3 players and the rest all are simply cheering for them in their own unique ways.

FKS firstly becomes an enjoyable experience for everyone because of its emotional theme which talks about the most untouched or tense relationship in a middle class family that is between a father and his son. It enlightens a young father about how to bring in more positivity into this important bonding taking it onto a different level altogether.

Secondly it very importantly teaches you the value of Forgiveness when a person simply forgets and forgives his dear friend for having played a dirty game with him (ruining his entire life), arising out of professional jealousy & greed. And I rate a particular scene in the film, between Boman & Paresh as one of the best scenes of current times, capable of teaching you the art of forgiveness in just a few seconds.

Thirdly but most importantly, FKS actually gets converted into a worth watching film because of its two flawless performances by Sharman Joshi and Boman Irani wherein they both quietly surpass their own benchmarks set in their other famous masterpiece 3 IDIOTS. Sharman Joshi is simply exceptional in his simple yet impressive performance of an honest father. He infuses great positive energy in the entire film, especially in the opening and last 15 minutes when you honestly cannot stop falling in love with his character on screen. Complimenting him beautifully there is Boman Irani who undoubtedly is one of the most talented character actors in Hindi Film Industry at present. Boman simply takes over from Sharman like a relay race post intermission and delivers an even better performance than his 3 Idiots. Completing the trio is Ritwik Sahore, the kid who despite of being placed in front of such great actors, superbly makes his presence felt with elegance. Further, this team of 3 gets great encouragement from a brilliant supporting cast lead by Seema Pahwa, who is superb as the wedding planner and completely steals the show in many of her scenes.

Paresh Rawal is bang on in his short cameo and so are the other actors contributing a lot in the overall impact of the film. Cinematography adds to the excitement related with the Ferrari along with a fine background score. But musically, Pritam is just OK with nothing great as one does not remember the songs once out of the theater. The tag line of the review calls it a ‘near perfect’ film since FKS does have few weaker moments in its narration which could have been tackled in a better manner.

For instance the complete side track of a corrupt politician and his son’s wedding seems to be a bit over the top with many cardboard like characters. The plot also takes too many liberties with the Ferrari moving freely on the roads without being noticed and the song with the car flying in the air in reality looks absurd and avoidable. As seen in many earlier movies on cricket, the scenes featuring the game once again remain the weakest ones. Like, how can one look for hitting the wickets when the ball is being pitched way outside the off-stump (when Boman is bowling to his grandson)? Now as mentioned before, Why I would like to ignore these drawbacks in totality? That’s because we all lack one major feature in our lives which is called POSITIVE THINKING and FKS is full of the same positivity we all are looking for. We don’t get to see such positive films too often and that doesn’t mean that it is a ‘weepy movie’ at all. The film has a father and his son living their lonely life with a great positive attitude, people or neighbors helping out each other in the times of need and it even has good policemen, miles away from the routine kind of men on duty seen in every other film.

Keeping that in mind, FERRARI KI SAWAARI is indeed one of the best FAMILY films of 2012. It is a fine first time attempt by director Rajesh Mapuskar backed by the same talented men (Vidhu Vinod Chopra & Raj Kumar Hirani), who gave us Munna Bhai films and 3 Idiots. So that should be another big reason why it deserves to be seen by all. 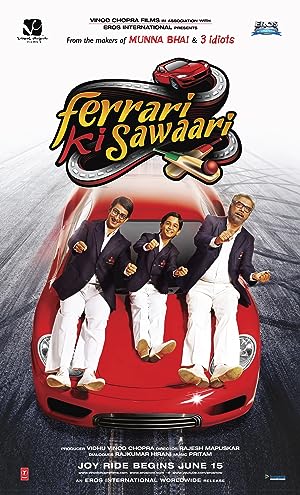