“What does your paradise look like, then?” – “Dark. Quiet. Wet. And full of fish.” Jan likes Shakespeare, water and fish. Nina likes roller-skates, cars and brightly dyed hair. Jan loves Nina. Nina loves Jan, but … Do Fish Do It? is a film about first love, the problems of growing up, the vital question if fish have sex and a threat this love is exposed to. 16-year old Jan is absent-mindedly strolling through the streets when he’s run over by roller-skating Nina. As fast as she has stormed into his life, however, she rushes off again. Nina is 15 years old and full of crazy ideas. She lives together with her brother, her father and his new girlfriend. Her mother isn’t in touch much. That’s why there is the unconventional Angel whose own daughter disappeared years ago and who is Nina’s best friend and substitute mother. Jan is a little shy, with a sheltered upbringing. Yet the image of the perfect family is an illusion. Jan feels lonely and the only person who seems to understand him is his grandfather. Jan’s great passion is water and fish for they make him forget about his illness. When Jan tries to carry a newly-acquired fish home safely, Nina bumps into him after another failed attempt to brake. As a result, the fish dies. Nina feels guilty, doesn’t want to let Jan go. Within a short time they get very close and Nina becomes equally fascinated by water and its scaly inhabitants. They start searching for an answer to the question if fish have sex and secretly meet at night to have picnics at the municipal aquarium. This is not without effect, friendship develops into tender love. Jan’s parents, who worry about their son’s health, are against the relationship. Only Jan’s grandfather stands by him and doesn’t begrudge him his happiness. On her birthday Nina learns that her father’s girlfriend is pregnant. Appalled, she flees to Jan. For the first time they end up in bed together. Basically a rather innocent encounter but Jan realizes all of a sudden that he’s dangerous for Nina and will continue to be so. He withdraws into his dream world – “dark, quiet, wet and full of fish”. But Nina won’t give up that easily …

Almut Getto created something only a few filmmakers are able to – an intimate portrait of young people falling in love for the first time. Although it all happens with one of the protagonists being HIV-positive, this is not another melodramatic movie about AIDS. No! “Fickende Fische” is first and above all a love story among two 16 year olds with all the normal problems, and AIDS being “just” one of them. Getto and her young actors perfectly walk the narrow line between intimate feelings and unrelenting fate – and manage to make the viewer an intimate part of this relationship.

Just as if we were one of the protagonists ourselves we feel our heart beat as they touch almost unknowingly for the first time; and feel with them each and every step of the following relationship.

“Fickende Fische” is a small movie. One of those that ask the audience to become a 16 year old boy or girl and fall in love again – and to deal with AIDS not in an AIDS-movie, but tragically and comically at the same time in a little big love story. 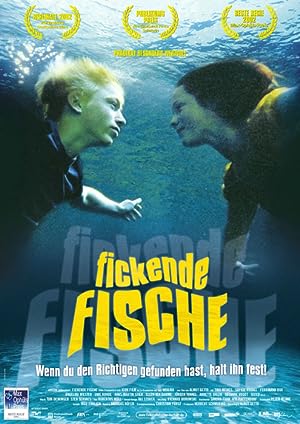