First Position follows six talented young dancers (ages 9-19) from five continents as they prepare for a worldwide ballet competition that could transform their lives overnight.

Producer/Director Beth Kargman has put together a wonderful documentary that follows six young ballet dancers to the Youth America Grand Prix, one of the most important of all ballet competitions worldwide.

The prizes at the competition include awards of recognition, scholarships, and work with major dance companies. The dancers are in several age ranges and ethnicities and include 11-year-old Aaron Bell, Joan Sebastian Zamora, a dancer from Colombia, Michaela Deprince,a black dancer, Jules and Miko Fogarty, of mixed ethnicity, pretty Israeli Gaya Bommer, and all-American girl Rebecca Houseknecht.

Michaela and her sister were adopted from Sierra Leone, where there was nothing but death and poverty. Michaela has been told that blacks make unsuitable ballet dancers — bad feet, too muscular, wrong build etc. For the competition, her teacher has her dance against type, doing a feminine, delicate dance.

Zamora lives in New York, far away from his family, but his father tells him there is nothing for him in Colombia and he has to go after his dream. Rebecca is a cheerleader and normal kid whose passion is dance, and Aaron doesn’t tell other kids he’s a dancer. All of them have great talent, as we can see from their dance routines at the Grand Prix. Zamora has stardom written all over him. Jules has decided he really doesn’t like ballet, which hurts his mother, but she accepts it.

A very inspiring documentary about youngsters from different backgrounds and social status with the dream of dancing in the ballet, and the sacrifices they have made to achieve their goal. The dancing is heavenly; I only wish there had been more of it.

Good luck to all these kids. I’m sure we’ll be hearing about most of them as time goes on. 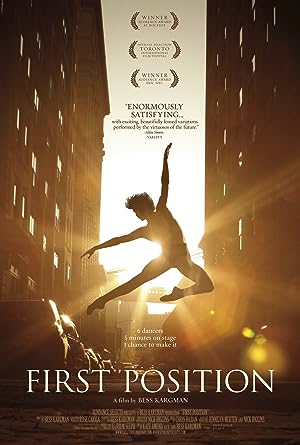 First Position (2011)
95 min|Documentary|10 Aug 2012
7.6Rating: 7.6 / 10 from 3,176 users
A documentary that follows six young dancers from around the world as they prepare for the Youth America Grand Prix, one of the most prestigious ballet competitions in the world.
Director: Bess Kargman
Actors: Aran Bell, Rebecca Houseknecht, Joan Sebastian Zamora, Miko Fogarty

Be the first to review “First Position 2011” Cancel reply