Freedom Is Paradise 1989 with English Subtitles

Young Sasha is brought into a state-run children’s home because his mother died early and his father spends most of his life in prison. The conditions are like in a penal institution. Sasha tries several times to escape and to search for his father.

Kids are the apple of our eye, but let the apples grow on someone else’s trees.” So says one jaded adult in this surprisingly candid look inside the erstwhile Soviet Union, where (contrary to external appearances) the iron fist of oppression has not entirely loosened its grip. The title refers to a Cyrillic acronym tattooed on the wrist of a young ‘delinquent’ who escapes (more than once) from reform school to search for the father he never knew. Except for the slight Oriental cast to his eyes the young hero might be any freckle-faced kid out of Middle America, and his cross-country journey, always one step ahead of capture, turns what could have been a familiar coming-of-age drama into a unique Eastern European road film. The title, in translation, must have also expressed the heartfelt relief of a director allowed to make an honest film portrait of his country, depicted here as a series of smaller cages within the larger prison of the nation itself. 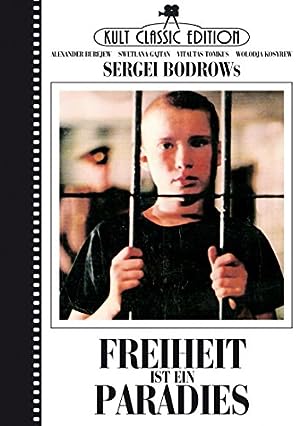 Freedom Is Paradise (1989)
76 min|Drama|N/A
7.1Rating: 7.1 / 10 from 203 users
Young Sasha is brought into a state-run children's home because his mother died early and his father spends most of his life in prison. The conditions are like in a penal institution. Sasha…
Director: Sergei Bodrov
Creator: Sergei Bodrov
Actors: Aleksandr Bureyev, Svetlana Gaytan, Vladimir Kosyrev, Kseniya Nazarova

6 reviews for Freedom Is Paradise 1989 with English Subtitles