Home » Non-English with Subtitles » From Afar 2015 with English Subtitles

From Afar 2015 with English Subtitles

Armando, a middle-aged owner of a Caracas dental prosthesis business, is estranged from his father, who he observes occasionally from a distance. He finds a young man of the streets who negotiates a fee high enough for the boy to be used to provide Armando’s masturbatory object. Although a following encounter ends in a beating for Armando, he continues to make the boy dependent. What is the final result that Armando desires? Is it something more than a conflicted relationship with a hustler?

This film is one of the best productions made in Latin America have seen in recent years. It shows clearly the loneliness and abandonment leading to attitudes often repulsive. The highly original narrative takes us to a completely unexpected outcome. In this aspect the film has a highly original narrative, nothing the usual story of an old man paying to have sex with a young man. Abandonment, loneliness, violence. The sad fact of everyday life. Excellent actors and an excellent pace of narrative to the end. The film even deserved all the awards he received. A masterpiece. I can not understand the criticism as negative other commentators. It’s an intimate film with enormous human content. For those who live in Latin America like me it is clear that the director knows the violent environment of cities like Caracas. Great movie. 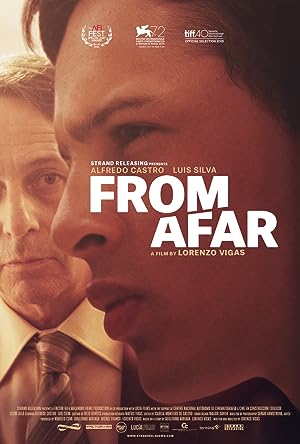 From Afar (2015)
93 min|Drama, Romance|02 Sep 2016
6.6Rating: 6.6 / 10 from 2,790 users
Armando, a 50 year man, seeks young men in Caracas and pays them just for company. One day he meets Elder, a 17 years boy that is the leader of a criminal gang, and that meeting changes their lives forever.
Director: Lorenzo Vigas
Creator: Lorenzo Vigas (screenplay), Guillermo Arriaga (based on a story by), Lorenzo Vigas (based on a story by)
Actors: Alfredo Castro, Luis Silva, Jericó Montilla, Catherina Cardozo