It’s a sweltering summer before the final year of school and Billie and Laura share every secret except for Billie’s biggest secret – she’s crazy in love with Laura’s boyfriend, Danny. When Billie’s social worker mum takes in Isaac, a troubled teenager looking to get his life straight, the delicate balance of the three friends’ lives is disrupted. As bushfires threaten the edge of their suburbs and they immerse themselves in the swirl of parties, possible love and the intensity of sex and desire, the world of the four teenagers is changed forever as their secrets are revealed and their lives, friendships and loves are thrown into chaos.

If you live in London, Los Angles or New York you probably get used to seeing your home city up in front of you when you sit down in the dark, but if you live in Canberra, Australia, this doesn’t happen too often. That is until Galore, an impressive teenage drama set here in the nation’s capital. I still haven’t quite got over seeing our local branch of Crust Pizza up on the big screen; our weekly pizza night feels slightly more Hollywood now.

Galore is ambitious, confident and bursts from the screen with the intensity of it’s subject matter. Played out in the preceding days before the tragic bush fires that swept through Canberra in 2003, writer director Rhys Graham beautifully captures the overpowering nature of adolescent emotions, their all-consuming nature and dangerous potential to burn out of control. The sparks in the centre of this fire are Canberran teenagers Billie (Ashleigh Cummings) and Laura (Lily Sullivan), two inseparable best friends, bonded together by the shared experience of teenage dreams. However, these dreams have the potential to turn into nightmares, as unbeknown to Laura, Billie also shares Laura’s boyfriend Danny (Toby Wallace).

When you are a teenager everything is intense, immediate and inviting, with little thought given to potential consequences; you live in the now and deal with the future when or if it comes. These feelings seem to epitomize Billie who is entirely centered on the now while also craving acceptance and validation from her friends and family. She is trapped in a doomed relationship triangle between Laura and the slightly unconvincing Danny, while also having to compete for her mother’s attention, a social worker who occasionally brings her work home, this time in the form of Isaac (Aliki Matangi). Billie acts as any teenager would by rebelling, taking rash decisions and leaving others to pick up the pieces.

This level of intensity is difficult to sustain and empathise with, but you genuinely feel for the struggles faced by Billie. Cummings brings an impressive level of reality and realism, which invites the audience to not condone her actions, but simply to validate her emotions and the hold they have over her. Billie’s central relationship with Laura is affecting and feels grounded in truth with Sullivan blending just the right amount of naivety and curiousness to Laura. The wider cast members do not quite reach these standards with Wallace in particular seeming too young and inexperienced for both the role and also to be the subject of such affection.

What makes Galore glorious though is Stefan Dusico’s at times really quite breathtaking cinematography. Dusico’s extensive use of natural light accentuates the drama, and strips further away at a script that already feels raw and refined. Dusico captures the natural beauty of Canberra through his depiction of the impeding firewall, portrayed as plumes of smoke amongst the surrounding hills, which edges closer to the action as the narrative, and indeed Billie, slowly unravels. The relentless march of the smoke seems to portray the inevitability of the consequences of Billie’s actions and serves as a potent and stark reminder of what is to come.

From a young and relatively inexperienced cast and crew, Galore is an impressive and ambitious Australian teen drama, which captures the intensity of those formative teenage years in an effective and engaging manner. Galore also showcases that Canberra is more than just a temporary home for politicians, it is a rich, vibrant community, in which teenagers experience the same trials and tribulations as in any other city in the world. 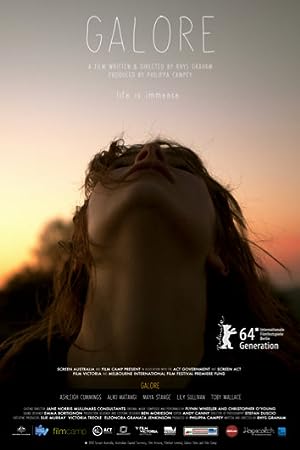 Be the first to review “Galore 2013” Cancel reply