Sei is reading aloud in his Primary 6 class when his pubescent body betrays him. Suddenly alert to the delights of the female sex, he develops an instant crush on junior high school pupil Nao. Nao has more than younger boys to worry about, as her parents acrimonious divorce and father’s failing business mean she is already growing up too fast.

Perhaps only in Japan could a film on primary school children experiencing first love feature close up shots of semen. The biological, visceral elements of this universal anguish are foregrounded in this narrative, which still somehow manages to achieve an authentic tone that will bring back bittersweet memories for many. Masahiro Hisano as Kei and Yukika Sakuratani as his muse Nao give naturalistic, endearing performances that drive the film. Sei’s torment is heartfelt and gut-wrenching. It speaks directly to your own long-buried primary school self. Jun Kunimura is under-used as Sei’s father, a worldly-wise temple priest. His one moment of offering advice, along the lines of there is no fathoming of the female species to be had, is a terrific moment of father-son bonding.

Where the writing falls short is in the depiction of the two mothers. Sei’s mother gushes and delights in finding her son’s crusty underwear under the bed, and tells all and sundry of his entry to puberty as if he had passed the entrance exam for Cambridge. Nao’s mother, in the one scene that we get to see her, turns out to be equally frivolous and giggly. It is odd that the fathers are depicted with layers but the mothers are so one-note and fraudulent.

Charming and engaging, this film delights and entertains in equal measure. It reminded me of my own long-forgotten first crushes and squirming embarrassments. Nostalgia of the best kind. 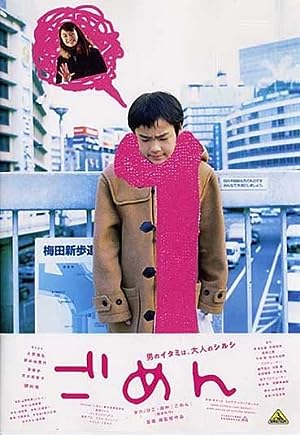 2 reviews for Gomen 2002 with English Subtitles