A touching tale of a wayward young man who struggles to find his identity, living in a world where he can solve any problem, except the one brewing deep within himself, until one day he meets his soul mate who opens his mind and his heart.

While everyone took sides with L.A. Confidential (for it’s Old Hollywood flair and tight-as-a-girdle plot arc) or Titanic (for it’s generally inescapable, juggernaut-like aura) as the Best Picture of 1997, it seems that too many people overlook Good Will Hunting for what it was: a timeless little opus that managed to make South Boston look romantic and happened to make Ben Affleck and Matt Damon some of the most deserving superstars in recent memory.

Because before they were anybody, they were just the writers of this tale of a reluctant human being named Will Hunting, a mathematical genius who wore the guise of a hoodlum, and all of the sudden obstacles he had to take on to truly step in to manhood. Among these obstacles were a straight-forward shrink who outright dared Will to bulls*** him (played by Robin Williams, who got his overdue Oscar for it), a brilliant M.I.T. professor who felt it his own personal redemption to put Will’s mind to great use somehow (Stellan Skarsgård, who never fails to steal nearly every scene he’s in), and a girl who doesn’t understand why the boy she loves so much cannot love her.

It was these obstacles that made Will Hunting such a complex character: while he was a genius at the definite (math), he was a bit of a moron at the indefinite (human relationships). His rough-edged exterior was simply a cry for help, and the process of which the obstacles in his life realized that and attempted *to* help him was nothing short of extraordinarily touching. 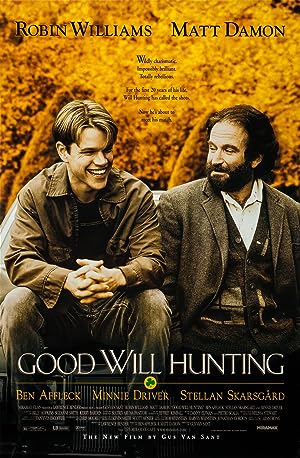