Germany in the 1970s. Whilst waiting for his girlfriend, a young student, Franz, allows himself to be picked up by 50-year old businessman, Léopold. In his apartment, Léopold provokes Franz into revealing his homosexual experiences and soon manages to seduce him. Six months later, Frantz has moved in with Léopold and they appear to live as an ordinary married couple. The strain is beginning to show, however, and after a row Frantz threatens to leave. Whilst Léopold is away, Frantz is visited by his former girlfriend, Anna, and their romance is soon rekindled. Before the two lovers can escape, Léopold returns and his charms persuade Anna to stay. Léopold’s ex-lover Vera then makes an unexpected appearance and the menagerie is complete…

François Ozon has flair and style (‘Swimming Pool’, ‘Under the Sand’, ‘8 Women’, etc) and in scripting Rainer Fassbinder’s 1970s play ‘Gouttes d’eau sur pierres brûlantes’ for the screen he has created an edgy, fun, and poignant examination of the lives of four people at their intersection.

Act I (for that is the way the film is laid out in homage to Fassbinder’s play): 50-year-old Léopold (Bernard Giraudeau) is entertaining 19-year-old Franz (Malik Zidi), who he has picked up in a bar, with sharp repartees about his past loves and is sparred by Franz relating his current affair with the young and beautiful Anna (Ludivine Sagnier). The conversation gradually gets around to seduction and both Léopold and Franz happily reenact each other’s physical fantasies. Act II: some months later and Franz has moved in with Léopold becoming the devoted housewife in lederhosen to Léopold’s increasingly cranky self. They argue, threaten, but eventually succumb to the safety of the boudoir to settle differences. Act III: Léopold’s ex lover Vera (Anna Levine) arrives at the door to find Léopold in a new life and departs brokenhearted. Anna likewise arrives during one of Léopold’s absences and for two days Franz and Anna try to recapture their previous affair. Upon Léopold’s return, Anna finds Léopold appealing and behaves seductively. Vera arrives, reports that she is a transsexual now in a female form, and Léopold is delighted with the idea of a ménage a quarte. But it is Franz who has found his true life and love and how he deals with the proposed turn of events forms the rather surprising end to this film.

Each of the four actors is excellent and Ozon paces them well. There are some really fine moments, as when Franz reclines in his bath quoting Heine’s poem ‘Lorelei’ revealing how far more penetrating the changes in his vision of his life really have become, when Ozon improves on Fassbinder. Not a great movie but a bit of the different that spices movie viewing. 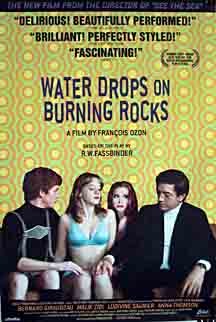