Paul and Agnes have been going out for quite a while and Agnes is shocked to learn that he’d rather live with two roommates on campus than move in with her. As soon as he meets one of his roommates, Louis-Anault, Paul’s behavior changes – he is attracted to Louis without realizing so himself. Agnes, on the other hand, gets quite jealous and offers a bet: Whoever gets to have Louis-Anault first, wins… If she does, Paul will no longer explore his homosexual desires, if he does – she’ll walk away. Meanwhile, Paul meets Mecir, a young Arab worker, who shows him there’s more to life than elite colleges…

a love triangle. social references. the fight to be honest with yourself. friendship, family, appearances, dialogues – in French cinema style- about different themes, frontal male nudity and the temptation, a scene in locker room who could be the axis of film, a wise manner to present the sex scenes, a long trip of the lead character for define, in right manner, his feelings. a film who not gives many surprises. only a new perspective for few scenes without dialogue, in which the look and the tension are really great for suggest desires and the essence of a sexual orientation. and the great thing is the status of pieces from near reality for each scene. the decent performances, the relationships as subtle mix between lights and shadows, the science to use the story for a refreshing message. this does École ecole a good movie. 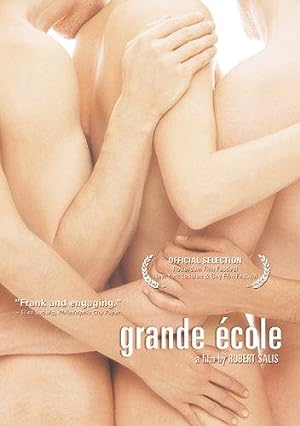 Grande École (2004)
110 min|Drama, Romance|04 Feb 2004
5.7Rating: 5.7 / 10 from 2,131 users
Paul and Agnes have been going out for quite a while and Agnes is shocked to learn that he'd rather live with two roommates on campus than move in with her. As soon as he meets one of his …
Director: Robert Salis
Creator: Robert Salis (scenario), Jean-Marie Besset (scenario), Jean-Marie Besset (play)
Actors: Gregori Baquet, Alice Taglioni, Jocelyn Quivrin, xc3x89lodie Navarre