A telegram has just arrived ant the Persichette home in Italy. It seems that their late grandfather’s second wife, Maria Juana, is traveling from Venezuela to Italy to visit her stepson and two grandchildren. The youngest of the boys is given the task of picking up grandma at the airport. Expecting an aged widow, he is stunned , amazed and aroused by the incredible beauty that awaits him.

Have you ever wanted to see a male teenager lose his virginity to his grandmother? Well, here’s your chance. Of course, it should be said the “grandmother” in this film is a twenty-something Venezuelan hot tamale played by the famous French/Algerian hot tamale of 70’s Italian exploitation film, Edwige Fenech. She marries the main character’s elderly grandfather who, not surprisingly, dies on his wedding night, and after his death she comes to live with her new in-laws. Of course, she immediately arouses the lust of both her “grandsons”, her “son”, and even the local priest. The main conceit here is much too ridiculous to be very shocking, but it isn’t very funny either. The only reason I can think of that anybody might have watched this movie is to see Fenech naked. But she’s been just as naked in a lot better movies. Suffering through this cringe-inducing Italian comedy is a steep price to pay even for die-hard Eurobabe oglers. 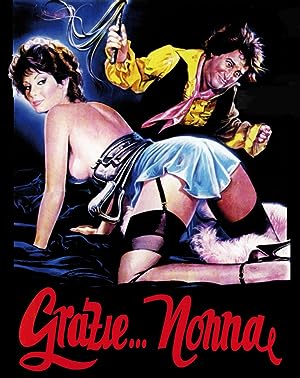