Tomas is too much for his lone mother so she sends him to live with his older brother Federico, aka Sombra, in Mexico City.

A voguish feature debut from Mexican filmmaker Alonso Riuzpalacios, shot entirely in Black and White with an uncommon 1.37:1 aspect ratio. GUEROS is a pristine debut full of promise but also sink into the filmmaker’s own ideal existential wallow.

In the opening scenes, the film directly prints the explanation of the word “güeros” on the screen, in case us foreign audience cannot catch the meaning, and it proposes two options, it is either a discrimination against colour or against homosexuality. And the film only deals one of the two. Set the backdrop of an undefined time (where Walkman is still popular, I suppose, should be in the 90s), Tomás (Aguirre) is a young boy lived with his widow mother, being too naughty, he is sent to live with his big brother Federico aka. Sombra (Huerta), who is a college student living with his roommate Santos (Ortizgris) in their messy apartment.

While the university students are in the middle of a massive strike. The trio lay around in the apartment doing nothing. Since Tomás is a devotee of an over-the-hill musician Epigmenio Cruz (Charpener), who is sent to hospital due to poor health, the news triggers his quest to find him and ask for an autograph. So the story maunders around a two-day road trip, en route they visit the hospital, bump into some dangerous thug, reunite with Ana (Salas), a fervent activist student in the campus, party-crash, go to the zoo while Sombra has to face his worst nightmare, a tiger, and eventually track down Epigmenio in a remote cantina. Ostensibly, it is another plot-doesn’t-matter ethos-journey combined with political agenda, budding romance, surrealistic touch, fly-on-the-wall realism and the dry humour.

The picture exudes appealing élan thanks to its swift camera movement, monochromatic freshness and the idiosyncratic treatment of the fictional Cruz’s music – a muffled void defies categorisation. But, the momentum doesn’t hold up, soon, the journey deflates into an aimless wander, pry into the underbelly of a contemporary Mexico but never reach a cinematic catharsis or produce any prospective worth of excitement, the main characters are bankrupt of any empathy or charisma to keep up audience’s attention of their often arbitrary behaviour. It is a film eventually fails to live up to its master-class craftsmanship, but considering its successful tournament in the international festival circuits, I might again find myself in a minority of one, to each his own taste, GÜEROS doesn’t emerge as a comprehensively outstanding film in spite of its uniqueness. 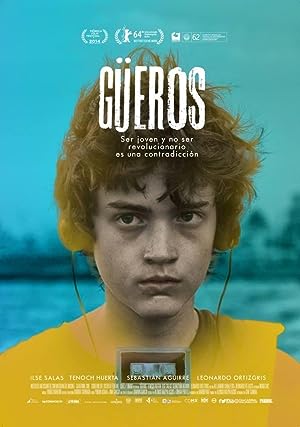