When a young woman rejects her current overweight suitor in a restaurant, he unexpectedly places a curse on her. The film then moves on to her sisters. One is a happily married woman with a psychiatrist husband and three kids. Unfortunately the husband develops an unnatural fascination for his 11 year old son’s male classmates, fantasizes about mass killing in a park, and masturbates to teen magazines. One of his patients has an unrequited fascination for the third sister. Meanwhile the apparently stable 40 year marriage of the sister’s parents suddenly unravels when he decides he has had enough and wants to live a hermit’s life in Florida. Obviously, the whole movie is slightly warped in its viewpoint and certainly presents abnormal relationships among all of its parties.

I don’t want to waste time analyzing the plot since others have covered it so well… Basically here we have a Robert Altman-esqe pastiche of characters stemming from a seemingly normal family, plus others who come into their lives. Solondz sets them up and examines their lives, their dreams, their interactions and their facades. What’s important is that he doesn’t JUDGE these people. And even more importantly, he doesn’t condescend to his audience. Like it or not, the people in this movie do exist and I think viewers instantly realize that.

This movie stirs up such strange emotions. It’s tough to admit that we may have something in common with a Suburban pedophile, a pathetic dreamer, a pretentious literary snob or a obscene telephone sex stalker and one of the most frightening ideas ever put on film is here: Solondz makes plausible the people we view as being “sick” or generally look down upon aren’t that much different than us. They still want the same things we do. And he also questions the ideals America seems to hold most dear, like monogamy and morality. And yeah, happiness. How exactly DO you find happiness? Is ANYONE really happy?

I cannot recommend HAPPINESS enough (neither can I with the director’s equally impressive and incisive WELCOME TO THE DOLLHOUSE). It’s just an extraordinary movie; surprisingly funny, intelligent, brutally honest, powerful, original and relevant. The cast is thoroughly excellent and Solondz follows his own compass at all times in both the scripting and directing department. He’s a brave filmmaker and I really have a lot of admiration for directors and writers who stray away from the tired Hollywood blockbuster formula. Good for some popcorn, sure, but aren’t you glad there’s other stuff out there to choose from?

Reading some of the other reviews posted here I was surprised at the amount of negative comments. I guess this isn’t for everyone out there. If you want a fun night of fantasy escapism or a brainless comedy, don’t bother. But if you want a blisteringly funny dose of reality, then don’t miss this! Definitely a top contender for My 10 Favorite Movies of the 1990s list. 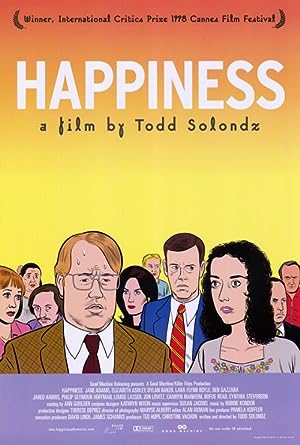 Be the first to review “Happiness 1998” Cancel reply