A remote fishing village in Iceland. Teenage boys Thor and Christian experience a turbulent summer as one tries to win the heart of a girl while the other discovers new feelings toward his best friend. When summer ends and the harsh nature of Iceland takes back its rights, it’s time to leave the playground and face adulthood.

This film tells the story of two young boys, who are experiencing and exploring romantic feelings in their Icelandic summer.

Much of the first half of the film portrays violence, bullying and animal cruelty. The antisocial behaviors are quite shocking to me, as I have always imagined the idyllic Iceland to be a peaceful place with nice people. As the turbulence grows, the tension between the children increases. It is sad to see that Thor does not see what is blindingly obvious, and it takes a tragic event to wake him up. This story is a harsh coming of age film. 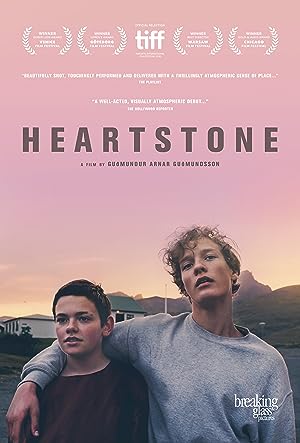 2 reviews for Heartstone 2016 with English Subtitles