Kat Candler’s six-minute short film Hellion promises to grow — funding-permitted — into a mayhem-filled feature-length film; but, for now, the short serves as a medias in res introduction to three young brothers (Deke Garner, Arthur Dale and Tommy Hohl) and their incredibly rambunctious ways. On the day that we meet the three hellions, we find that they have been left alone with an obviously unqualified babysitter (Karinne Bersti) who has already been — how should I put this? — removed from the equation. Left to their own devices, anarchy ensues (in tandem with a heavy metal soundtrack); but the Lord of the Flies atmosphere instantly evaporates into thin air as soon as their father (Jonny Mars) gets home.
Presumably a single father, he rules the house with a mighty belt and thus the boys are immediately bent over a bed and forced to suffer the consequences of their actions. For the two older brothers, it seems that their father’s punishment is probably not convincing enough to deter them from acting out again. (I can only assume that Candler’s feature will include a lot more mischief coming from those two.) The youngest brother, however, seems to be a good kid who lives in a constant state of fear of being beaten.
Candler (Cicadas, Jumping Off Bridges) has an undeniable talent for creating very specific atmospheres within her films. Shot on location in Georgetown, TX, Hellion relishes in the youthful ecstasy of absolute freedom. Although a different era altogether, Hellion is somewhat reminiscent of the scenes of the young boys in The Tree of Life. Both films brilliantly reveal the wildness of boys when left to their own devices as well as highlighting the irresponsible choices that they tend to make — in both films this feeling is captured purely with visuals, with the use of very little dialog.
Hellion works well as a short film, but it is a really awesome teaser for a feature film. It left me incredibly curious about how this six-minute sequence of events will fit into the timeline of the feature-length film… 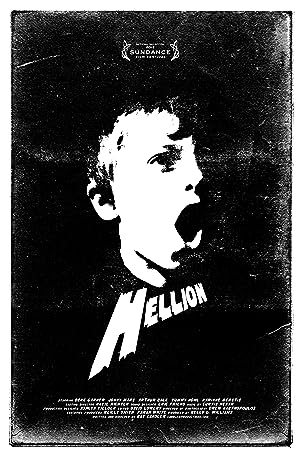