Xavi goes down to his family holiday home in Spain where he meets his best friends. As a gang they enter a race to win the magic tree house where Xavi can wish for his Dad to come back after his parents split and his mum re-marries. During the holiday Xavi learns about love for girls and learns how to accept his step dad after lying to his friends. And as a gang they build a cart that will hopefully win the race.

This small Catalan film won the Audience Award at the Spanish Film Festival of Malaga 2010 and we will understand towards the end why. “Héroes” is a charming story of a meeting, bathed in both a bright summer, the sweetness of childhood and carefree 80s. It follows with flashbacks, the summer the most marking a band of kids. The construction is simple, and compares the tensions between the young woman, with free temperament (even libertarian), a kind of vagabond without commitment and the driver of the car, serious and rigid entrepreneur (who certainly, cliché attention, and a childhood memories of a group of 4 children who desperately seek a fifth to participate in the local challenge (win the treehouse for a whole year …).

The age of the kids, their first emotions, the challenges they face, how they confront the world, necessarily mean a classic like “Stand by me” by Rob Reiner. Everything is there, concentrated in an hour of thirty times, the futile stakes of youth, the rivalries between harmless bands, the time that begins to pass, inexorably (the construction of the barrage that engulfed the village is gradually emerging …). All this smells a nostalgia assumed, even outdated. And this one dematerializes suddenly when one crosses, at the bend of a scene, tubes, like the “Big in Japan” or the “Forever young” of Alphaville, rather appropriate (although, it must be confessed , I’m a fan – new album “Catching rays of giants” for sale on the internet since November …).

To be carried is then easy, the opposition between blasé or unhappy adults and promises of youth being always effective. This promise that the young woman of the car made to another, to “always live beautiful moments” certainly participates in a dramaturgical construction certainly a little easy, but that can still meet a certain resonance. Especially since interpreters, both children and adults, are credible from end to end, and the partly unexpected ending is likely to tear you away. There are sometimes memories that you do not forget, people who stay with you for a long time, even if they have come out of your life, people to whom it owes much, as whole sections of self. Seeking to find them is tempting, but is not something obvious, nor easy to live with. “Heroes” speaks of these people and invisible bonds with those who remain close, in spite of the time, in spite of the absence, and to whom one wanted to say one day: “Queda (te) conmigo with me “) without necessarily daring. 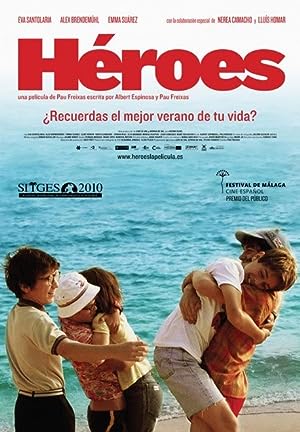 Forever Young (2010)
N/A|Comedy, Drama, Family|22 Oct 2010
7.2Rating: 7.2 / 10 from 634 users
Xavi goes down to his family holiday home in Spain where he meets his best friends. As a gang they enter a race to win the magic tree house where Xavi can wish for his Dad to come back …
Director: Pau Freixas
Creator: Albert Espinosa, Pau Freixas
Actors: Eva Santolaria, Alex Brendemühl, Emma Suárez, Lluís Homar