“But if you forget to come back for Madame Zeroni, you and your family will be cursed for always and eternity.” Those were the exact words spoken to young Elya Yelnats the day he forgot to repay Madame Zeroni. From then on his family was cursed with bad luck. One hundred years later Stanley Yelnats IV is accused of stealing a pair of cleats from a major league baseball player and sent to Camp Green Lake (a dry lake bed in the middle of the desert). It never rains at Camp Green Lake, it hasn’t for one hundred years. The secretive and mysterious Warden has each inmate spend every day digging one hole to “build character.” But when an artifact from the famous “Kissin’ Kate” Barlow is found in a hole, the Warden forces the boys to work double time leading Stanley to deduce they’re digging because the Warden is looking for something. But what? And how is the mystery of Camp Green Lake connected to Stanley’s family curse?

This is one of my favorite films of all time. I read the book and liked it, but this movie expands on everything the book made famous. The acting is fantastic, especially from Jon Voight, who plays Mr. Sir, a very evil character. This film has a certain way of storytelling that keeps you hooked throughout, until the end where everything is pulled together for a great ending. I also love the way this is directed, by flashing back and forth between the modern day and Stanley’s ancestors’ stories. The story was written by Louis Sachar, yes, but it seems that this story is made for film, and Andrew Davis does a great job directing it. I definitely recommend this to anyone who enjoys good movies. 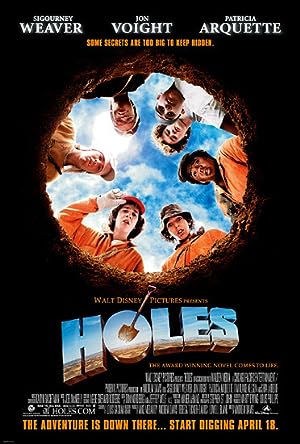 Be the first to review “Holes 2003” Cancel reply