A young couple, Havana & Peter, rob a county fair of its daily receipts and escape to Canada to hide out in the Hutterite community where Peter was raised. While there, they get married to satisfy the conservative elders in the community. Peter hides their loot in a secret hiding place, but then soon dies in a car wreck. His much younger brother Zeke is called upon to replace his brother and marry Havana. Zeke already hates Havana because he believes she is what changed his brother. She begins looking through everything that was Peter’s, and Zeke rightly deduces that Peter hid something from her. He finds the money, along with a newspaper article that mentions Peter as the prime suspect in the robbery. Zeke initially uses the cash to trick his bride into doing housework. Later he shows it to the elders, who deem that it should be returned to its rightful owners. Zeke and Havana (who claims innocence of the source of the money) are sent on a quest back to the US to return the money.

Betsy (Patricia Arquette) and Peter (Tate Donovan) rob a carnival and go on the run. To hide out they return to the religious commune where Peter grew up. He hides the money and then promptly dies. To remain in the commune and find the money Betsy marries Peter’s younger brother Ezekiel (Joseph Gordon-Levitt), leading to “comedy”, “adventure” and “love”…..

What could be better than a comedy set in an Amish-style community starring Patricia Arquette and directed by Spock? Well – quite a lot actually. The plot is pretty thin and all the “comedy” revolves around the mis-match of the boy and his adult wife. This gets very thin very quickly, leaving only the “thriller” plot of the dirty FBI agent hunting the money himself (John Schuck). Unfortunately the thriller element doesn’t work either.

Patricia Arquette is poor in the lead role playing a very unsympathetic character that flicks between two emotions – angry and repentant. Gordon-Levitt is good as Ezekiel and has some of the few funny moments in the film. However he is hampered by the poor material he has to work with. Support from Donovan and Schuck is as poor as you’d expect.

It’s not a terrible film but it’s just all so lame. There’s nothing to really make you feel strongly either way and to me that’s worse than a film that’s laughably bad. The whole project is pointless. 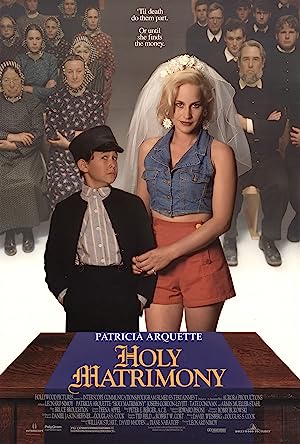 Be the first to review “Holy Matrimony 1994” Cancel reply