Life for an isolated rural family is upended when a major highway next to their property, constructed 10 years before but apparently abandoned, is finally opened.

Isabelle Huppert is a French mother of three, whose husband goes off to work in a big green diesel Mercedes estate. Their youngest is a boy, about 8. Then a girl, about 14, who’s studious and questioning. Eldest is a late-teen daughter who wears as little as possible, chain-smokes and sunbathes in a bikini on a lounger in the garden, with heavy metal pounding from a ghetto-blaster.

This scenario and scene is featured and remains with us most of the time, in one form or another. Oh, except that their rather run-down shabby house sits right bang next to a motorway, that carries no traffic, except as the biggest car park imaginable for the family, who also use it as an extension to their property. They need to cross this bitumen desert to reach civilisation; work, shops and school for the kids.

One day, the boy sees trucks on the carriageway, whilst out on his bike. Soon after telling his father, who doesn’t believe him, the motorway is resurfaced overnight. Radio reports say that it’s the missing link in the national network and there’s huge interest from the motoring public. The two youngest anticipate some new projects coming on.

What happens next is bizarre, believable and really rather frightening. And comical. By trying to live their (rather odd) lives exactly as before – crossing the road for school, shopping, bikini-sunbathing – all a few feet away from juggernauts and during a heatwave.

The way that the stakes against them get higher and naturally seem more bizarre, the more they try and carry on regardless, perhaps in the same way as if you tried to re-route an ant trail. Toward the end, you will start wondering where on earth all this can possibly lead to – I’m not going to spoil it for you!

I did think of one of Michael Haneke’s early films when watching ‘Home’ that had this sort of ‘in reverse’ psychology, but which was decidedly cold, un-humorous – about a perfectly ordinary middle-class Austrian family, who coped – and then didn’t.

You can, of course, take Swiss director Ursula Meier’s fable as a comedy, or an environmental statement or a family drama, or all three. Being very different, it grabs the attention, without ever being ridiculous and somehow manages to sustain this element and story all the way through. It’s also decidedly ‘Continental’, the bathing habits of the eldest daughter, naked and smoking in the bath listening to her Walkman, with the rest of the family chatting away next to her, mostly clothed. This – and other forms of a natural lack of inhibition seems healthy and refreshing, especially compared to our British straight- laced ways.

I give 9/10 as it’s an ambitious film in both its audacity and originality and the fact that it gets away with it, becoming a sort of psychological horror. . .For a film to be so memorable is rare these days, although the title, unfortunately is. All the players, especially Huppert (naturally) are uniformly excellent and totally believable, as is their environment, which IS worrying…. 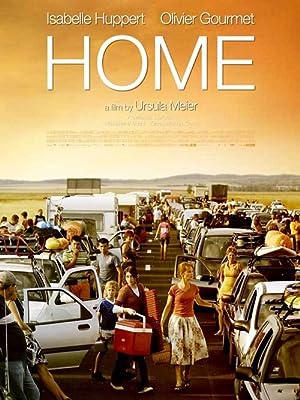 2 reviews for Home 2008 with English Subtitles