American teenager Elizabeth “Daisy” is sent by her estranged father away from New York to the countryside of England to stay with her Aunt Penn. Her distant cousin Isaac welcomes her at the airport and drives her home. She is introduced to her cousins, seventeen year-old Eddie and young Piper and to their friend Joe. However Daisy is a resentful, needy of love and aloof girl who believes that she is cursed and that bad things happen wherever she goes since her mother died in her delivery. Aunt Penn is a busy woman who is studying the war scenario in England, which is on alert due to an imminent terrorist attack, and needs to fly to Geneva. However, the next morning, a nuclear bomb explodes in London and the authorities of the United Kingdom declare a state of siege. Meanwhile Daisy and Eddie fall in love with each other, but they are separated by the military, which sends girls to one camp and men to another. Daisy and Eddie promise to meet each other again. In a country at war, Daisy and Piper flee their lodging and cross England under martial law, trying to find Eddie and Isaac.

This film starts out on a slow burn, but is not about car chases, explosions or blood and gore. With that out the way, what it is, is warmly filmed and deftly directed. I found it a very enjoyable exploration of the aftermath of a civil war, and the impact that has on several young lives. Some reviewers have commented that setting that civil war in the UK is not realistic. But that is to wholly miss the point of this movie. It’s a film about people under extreme adversity and random circumstance, the setting is peripheral. Its about they deal with the fast changing situation, and the changes that occur in them as a result. Well paced from at least a quarter of the way in the ending is emotional and moving. I’ll leave it for you to judge if you agree with me. So long as your not looking for a happy movie, but something that digs a little deeper…. then I don’t think you will be disappointed. 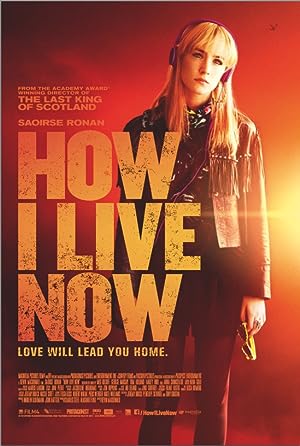 How I Live Now (2013)
101 min|Romance, Sci-Fi, Thriller, War|04 Oct 2013
6.5Rating: 6.5 / 10 from 26,043 users
An American girl, sent to the English countryside to stay with relatives, finds love and purpose while fighting for her survival as war envelops the world around her.
Director: Kevin Macdonald
Creator: Meg Rosoff (based on the novel by), Jeremy Brock (screenplay by), Penelope Skinner (screenplay by), Tony Grisoni (screenplay by), Jack Thorne (additional material)
Actors: Saoirse Ronan, Tom Holland, George MacKay, Harley Bird