KRYSTAL is a comedic drama about a young man who has never had a drink in his life. Upon meeting the woman of his dreams – an ex-hooker-stripper-junkie-alcoholic – he pretends to be in AA to try and woo her. In order to have even a hint of a chance, he must face his own demons and learn what it means to live without fear in order to finally become a man.

Motion Picture Rating (MPAA)
Rated R for language throughout, drug use, some nudity and brief sexuality

This film tells the story of a 18 year old man who falls for a woman who saved him on a beach.

It is enjoyable to see so many recognizable faces and even big names in an independent project. The family portrayed in the film is quite eccentric, and the atmosphere of the film is light hearted. I enjoyed it. 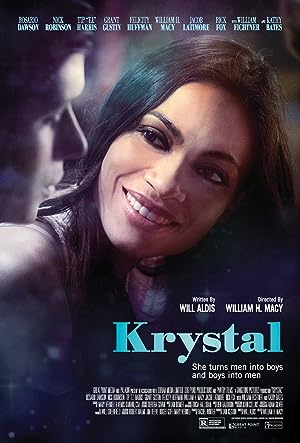 Krystal (2017)
90 min|Comedy, Drama|13 Apr 2018
5.3Rating: 5.3 / 10 from 813 users
A young man living a sheltered life develops a crush on an ex-stripper and joins her Alcoholics Anonymous group just so he can be in the same room with her.
Director: William H. Macy
Creator: Will Aldis
Actors: Rosario Dawson, Nick Robinson, T.I., Grant Gustin