How to Win at Checkers (Every Time) 2015 with English Subtitles

After the loss of both parents, 11 years old Oat faces an uncertain future when his older brother must submit to Thailand’s annual military draft lottery. Unable to convince his brother to do whatever he can to change his fate, Oat takes matters into his own hands resulting in unexpected consequences. Based on the stories from the bestselling book Sightseeing by Rattawut Lapcharoensap, the film is set in the economic fringes of Bangkok and examines the joys and challenges of growing up in contemporary Thailand. HOW TO WIN AT CHECKERS (EVERY TIME) is director Josh Kim’s debut feature film.

At 80 minutes in length, “How to Win at Checkers (Every Time)” is either a long short film or a short full-length film. No matter how you want to classify it, its length is appropriate. It’s based on two short stories by Rattawut Lapcharoensap and adapted by writer/director Josh Kimi into a rite-of-passage film.

Oat (Ingkarat Damrongsakkul, as an 11-year-old boy, and Toni Rakkaen, as an adult), when we first meet him, is a youngster in a poor section of Bangkok. He looks up to his older brother, Ek (Thira Chutiku), who earns next to nothing working at a local dive bar.

How_to_Win_at_Checkers.jpg
Everything changes when Ek must attend the army draft lottery. All 21-year-old males in Thailand must show up for the annual ritual. Those chosen in the lottery will be sent to Southern Thailand to fight against separatist insurgents. Obviously, not many hope to be selected.

Oat’s goal is to help Ek avoid being drafted, but his attempts bring him into a world he is not quite prepared to deal with, without being forced to grow up and learn how bad people can be to each other.

Kimi’s coming-of-age saga is somewhat effective when it focuses on Ek, but too much time is spent on Oat. All of the messages Kimi wants us to understand about his characters are touched upon, but I couldn’t help but wish that he spent more time exploring more of what was going on with Ek. The other parts feel more fleshed out than Ek’s life so it’s hard to call this a clear-cut win, even at checkers. It’s more of a draw at chess. 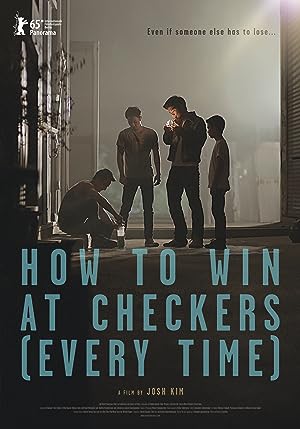