Josefin is a six-year-old girl who lives isolated in the countryside, where her father is a priest. She has no friends until she meets Hugo. He is a carefree boy who rather walk in the forest than go to school. Together with the gardener they make up fun things to do.

I remember first seeing this film in 1968 when it struck me as an important piece of art. I saw it again on UK television in the early 70’s and the second viewing confirmed my first judgement.

It is the story of two children of very different classes, one well cared for but sad, the other almost feral, but (mostly) happy. The atmosphere of genuinely enjoyed play on the young actors part, comes through in many of the scenes and I can still smile to myself over some of them, even though I have not seen the film for thirty years.

Now that I have grandchildren myself, I would like it to be available to them and to their parents as a realistic and very moving portrayal of what childhood was and should essentially remain, if only we could cut through the distractions of the 21st Century.

Why can I not find a copy on VHS or DVD? This is a great film of its time and needs to be more widely known about and watched. 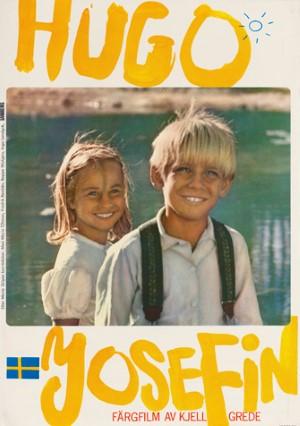 Hugo and Josephine (1967)
82 min|Family, Comedy, Drama|16 Dec 1967
6.3Rating: 6.3 / 10 from 293 users
Josefin is a six-year-old girl who lives isolated in the countryside, where her father is a priest. She has no friends until she meets Hugo. He is a carefree boy who rather walk in the …
Director: Kjell Grede
Creator: Maria Gripe (novels), Kjell Grede, Maria Gripe
Actors: Fredrik Becklén, Marie Öhman, Beppe Wolgers, Inga Landgré