Home » Non-English with Subtitles » I Are You, You Am Me 1982 with English Subtitles

I Are You, You Am Me 1982 with English Subtitles

9th-graders Kazuo (boy) and Kazumi (girl) take a tumble at a temple in a small seacoast town in Japan. Through supernatural intervention, their minds and bodies are switched, and the result is a touching and hilarious coming-of-age comedy as they attempt to survive the pressures of junior high school life.

Because I watched this raw, I had to look up words and phrases every now and then, but because of the somewhat cliché storyline (two high school students switch bodies) and surplus of physical humor, I never found myself confused. Although, I’m sure it would have been funnier with English subtitles.

Kobayashi Satomi is absolutely hilarious as she pretends to be the opposite sex. She perfectly changes her voice, posture, speech, and body movements to match that of a teenage boy, but she does it in such an honest way that, at some points, I believe she is an actual boy. The male lead, Omi Toshinori, is equally as successful in his portrayal of a school girl trapped in a boy’s body. His insecurity, the way he held his bag, covering his chest while wearing a swimsuit, his high-pitched voice–all the little things came together to create a performance that could not be more perfect.

Obviously, the film is predictable and occasionally lacks depth, but there are few filmmakers in the world who would be able to produce a quality film with a similar plot. This is a wonderful example of simplistic Japanese cinema and a classic in my book. 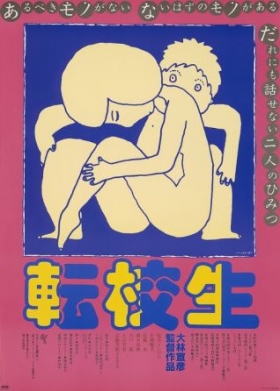 I Are You, You Am Me (1982)
113 min|Comedy|17 Apr 1982
7.3Rating: 7.3 / 10 from 181 users
9th-graders Kazuo (boy) and Kazumi (girl) take a tumble at a temple in a small seacoast town in Japan. Through supernatural intervention, their minds and bodies are switched, and the result…
Director: Nobuhiko Ôbayashi
Creator: Hisashi Yamanaka (story)
Actors: Satomi Kobayashi, Toshinori Omi, Makoto Satô, Sayuri Ishibashi

Be the first to review “I Are You, You Am Me 1982 with English Subtitles” Cancel reply