Armed with nothing more than twigs, their imaginations and a simple set of rules, a group of 12-year-olds engaged in a lively game of Capture the Flag in the neighborhood woods start dangerously blurring the lines between make-believe and reality. Paint-filled balloons = Grenades. Trees = Control towers. Sticks = Sub-machine guns. The youthful innocence of the game gradually takes on a different tone as the quest for victory pushes the boundaries of friendship. The would-be warriors get a searing glimpse of humanity’s dark side as their combat scenario takes them beyond the rules of the game and into an adventure where fantasy combat clashes with the real world.

Caught a screening of “I Declare War” at CIFF. What a tremendous film! It really captured what it felt like to have a best friend during childhood (the sense of loyalty and exclusiveness). Those were the most intense relationships of my life, especially when they came to an end. I thought the casting was just right and the performances outstanding (some of the best child acting I’ve seen, the characters of PK and Skinner were particularly memorable). “I Declare War” also struck a great balance between lighthearted and more serious content. I was glad to see that the narrative did not descend into savagery (in the manner of “Lord of the Flies”). The humor added much. I absolutely loved the imaginary dialogue scenes between Jess and Quinn. All in all, the script was very tight and well thought out. Keep a look out for its theatrical release! 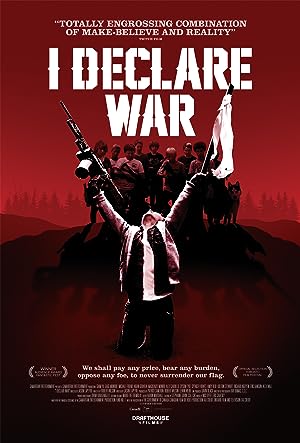 Be the first to review “I Declare War 2012” Cancel reply