1984. In the sultry, still sunny September of that Emilian rural district most soaked with catholicism and home-grown socialism, Elia, a teenager grown out of these horizons, lives with his parents: William, his father, who has got a strong ideological tendency to marxism, Maddalena, his mother, very prayerful, and his grandmother; with the ghost of his older brother Samuele, whos not coming back home since a whole year. It is harvest time in the small vineyard next to home, so the days of harvest begin and in order to give some help in the field arrives also Emilia, the nearly grown-up granddaugther of an old couple living in Elias same small town. The young woman decides to go back to her grandparents country town for a short time, to write her degree thesis and, in the meanwhile, to earn some money for a wee trip shes been planning for a while. Conceited and nonchalant, Emilia is a true revolution in the ordinary every day life of the provincial teenager but, in spite of everything, Elia will need just a few days to reawaken Emilias heart, which seemed to be submerged by disillusionment and a constant mediocrity 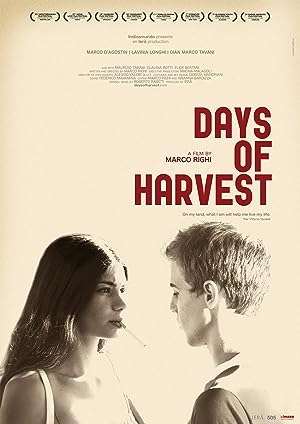