7-year old Steven Stayner is kidnapped a few days before Christmas by Kenneth Parnell. Under the belief that Parnell has been given legal custody of him, and that his family has moved away, he stays with Parnell for seven years, enduring repetitive sexual abuse the entire time. Finally, at fourteen, he returns home to his family.

One of those movies that really sticks with you due to the seriousness of the content.

Every parent, or everyone that will be a parent should see this one. It emphasizes the need to tell your children to NOT TALK TO STRANGERS.

This movie was made with a certain amount of class, they did not go for shock value by being more graphic about the sexual abuse going on. It became more apparent during the movie as it played out, yet thankfully the movie makers were more subtle about it in the midst of the movie.

Lifetime Network features a lot of these true to life movies, and kudos to them. I know it is all entertainment, but it is also informative to keep us on the defense of all of the sickos out there.

Steven in real life perished a few years after his escape, and that is tragic. Just as tragic is that Parnell recently tried to buy a child, like a loaf of bread or gallon of milk, for his sick needs. As a free man. Sad.

In closing, any parent or parent to be must see this movie. I know it is somewhat unpleasant, but in this day and age, it is really important to see the elements of a cancer to the innocent American way of life. 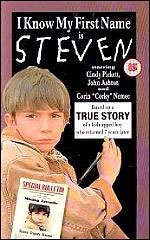 I Know My First Name Is Steven (1989–)
180 min|Crime, Drama|N/A
7.8Rating: 7.8 / 10 from 2,119 users
The harrowing true account of Steven Stayner, who was kidnapped by a perverted pseudo-priest and his lackey during the 1970s. As he gets older, he realizes that he needs to try to make an escape and get back home.
Actors: Cindy Pickett, John Ashton, Corin Nemec, Luke Edwards