In an indictment of the British public school system, we follow Mick and his mostly younger friends through a series of indignities and occasionally abuse as any fond feelings toward these schools are destroyed. When Mick and his friends rebel, violently, the catch phrase, “which side would you be on” becomes quite stark.

This glorious 1968 film is a document not just of its times but of the eternal and mysterious communion between two enormous artists. Lindsay Anderson, the director, the mentor, the older man and Malcolm McDowell his young, brilliant, loving disciple. The trust between this two men is overwhelming and the results are in every frame in every nuance. For me, to see this film after many years was a remarkable emotional experience. Daring, visionary with a Malcolm McDowell that broke new ground with the fearlessness of an explorer venturing into totally virgin territory. Brilliant, beautiful, unique. Lead by the magical hand of Anderson and McDowell we confront the anger of the artists with their love for each other. Wow! 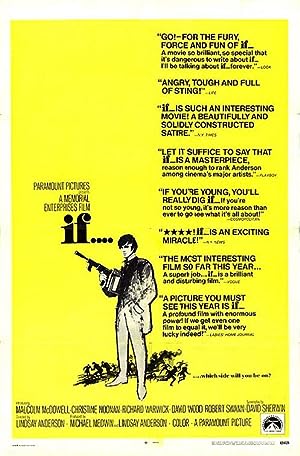