On a night almost like any other, a shy, awkward young man has his first ever sexual encounter with an older, experienced, but a bit jaded, trick. Unlike other nights, unlike other dark and odd evenings, this time passion is shared, souls are exposed and secrets are ultimately revealed — but at a cost. You see, sometimes, in order for someone to come out, someone else must go in. Willingly or not.

There are only two characters in Jody Wheeler’s short film: Griffin, a talkative, lighthearted, outgoing and self-confident guy; and Press who is shy, stern, clumsy and hermetic.

Jody Wheeler ponders on duality from the very beginning. Here opposing archetypes face each other and, more importantly, define themselves by their differences. If Griffin has had plenty of sexual experiences, Press is still a virgin; if Griffin is active, Press is passive. In spite of those differences, they seem to complement each other as Griffin explains: “You’re alone, I’m alone. Together we’re not”.

Are we doomed to loneliness without the other? Does everything have to obey the duality imperative to the extreme? If language is the key to understand the world, then it’s no wonder that a binary system is the most suitable approach. Ferdinand De Saussure defined language as a system of oppositions, in which everything could be reduced to signifier and signified. That’s why Press, indeed, affirms that it’s all about dichotomy “light and dark, day and night, come out – go in” (one could also add “human – inhuman”).

Without spoiling the end, if we blindly follow the “black and white” rule, without acknowledging the shades of grays, then it’s only logical that coming out of the closet implies also something coming in. But what will remain forever trapped in the closet after Griffin and Press sleep together? Neither the signifier, not the signified, that’s for sure. 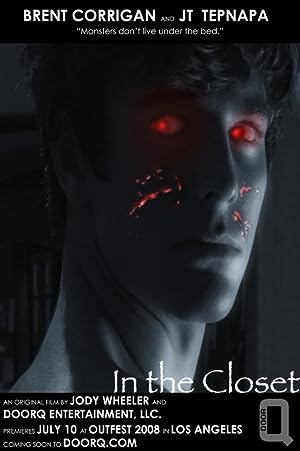 In the Closet (2008)
15 min|Short, Horror, Romance|10 Jul 2008
4.5Rating: 4.5 / 10 from 182 users
On a night almost like any other, a shy, awkward young man has his first ever sexual encounter with an older, experienced, but a bit jaded, trick. Unlike other nights, unlike other dark and…
Director: Jody Wheeler
Creator: Jody Wheeler
Actors: J.T. Tepnapa, Sean Paul Lockhart

Be the first to review “In The Closet 2008” Cancel reply