In the Realm of the Senses 1976 with English Subtitles

Based on a true story set in pre-war Japan, a man and one of his servants begin a torrid affair. Their desire becomes a sexual obsession so strong that to intensify their ardor, they forsake all, even life itself.

Despite the violent nature of the film, and the fact that it is based on a true event, I cannot think of another film that so truly captures the intensity of any emotional and sexual relationship at some point in its incarnation. If you have ever felt love and desire at their most powerful – the wish not to possess someone, but to become part of them and share with them how they experience the world – then you will recognize that feeling here. While certainly not a map for any relationship you might wish to have (I pray!), this film says more about what it means to be a man or woman than any other film I have seen. 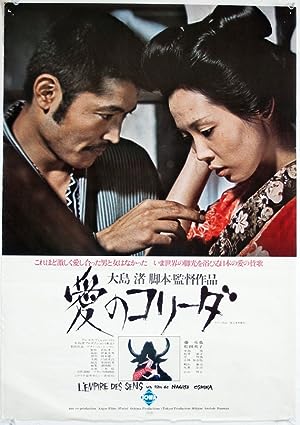 In the Realm of the Senses (1976)
109 min|Drama, Romance|01 Apr 1977
6.6Rating: 6.6 / 10 from 16,279 users
A passionate telling of the story of Sada Abe, a woman whose affair with her master led to a sexual obsession which then came to a violent end.
Director: Nagisa Ôshima
Creator: Nagisa Ôshima
Actors: Tatsuya Fuji, Eiko Matsuda, Aoi Nakajima, Yasuko Matsui