Enormous tree trunks. The nature of leaves, the roots of desire and a house hidden deep in the forest. A journey to the other side. Something like a “punk” existential fairytale.

While watching this i became acutely aware of the generation gap between the new arrivals and my own who are most probably their parents or at least their uncles and aunts.

So i wondered how my niece or nephew might enjoy this film as a right- of-passage film which reflects their age group. For myself i felt a mixture of impatience and boredom mixed with reminiscence for an early adulthood which has truly past for me at least. To this extent, whilst needing something to think about, I was struck watching the film that humans are destined to rediscover the same universe with each new generation. The same rite’s of passage, the same movement from childhood to adulthood, the same fumbling, the same moments of fascination and self absorption. I’m doing it even now, aged 48, where i find one is still fumbling forward in some sense but in a different sense to the age portrayed in this film.

That said, i did find the film almost painfully whimsical. Whimsy is the great undoing of youth. As an adult, there is little patience for such foibles, though again I was struck at how reflective of my own experience the furtiveness captured really is for the age-period of life portrayed. It was however, with great relief that having stuck out the ins and outs of this trio of characters, the film all but completed with what was a compelling, riveting and sensual threesome between the actors. Beautifully shot, a startling musical score and intense with a prospect of a director who finally might well have something to say. I could easily have done without most of what had gone before. The symbolism of fairy tale worlds,childhood, and so forth was all in keeping with it’s thematics but left me still essentially bored and wondering if the film might be pointless.

I wondered if the car exploding was something which had really been earned by what we had witnessed ? It was slightly an inverted Zabriskie Point moment. Only with Zabriskie Point, the explosion metaphor stands as a symbol for absolute patriarchal rejection. Here, perhaps it stood for the end of what had gone before, but i still felt that the furtive post adolescent exploration of boundaries of which the film mostly consists, just aren’t as significant or interesting as they may have felt at the time.

However as a symbol of a generation who usher in a new inter-sexuality which is indeed new, the opening and finale may yet still stand. Moving beyond the old order of straight, gay and lesbian, we are entering the dawning of multi-dimensional notions of both loving and gender. Certainly when new configurations of social sexuality emerge they are indeed socially explosive and one is left speculating if the three characters are coming to new conclusions or simply replicating the timeless experimentation of ages past. The gender politics portrayed was pretty conventional. The hansom ‘straight’male, confident, at ease with nudity, the furtive more reticent ‘gay’ male, a little closeted, lacking confidence and quietly desiring the straight male body of his girlfriend’s lover, the self absorbed enigmatic woman discovering her female ‘power’ – all standard non-boundary pushing portrayals. However the increasing representation of bisexuality in cinema is refreshing though reflective of that group’s current emergence as a psycho-sexual cultural discourse.

Refreshing to the new generation though is a lack of prudishness about filming genitalia as an extension of the expression of intimacy.The camcorder shaky aesthetic also characterises freshness, though at times here was a little reminiscent of The Blair Witch Project in it’s proximity to the sinister aspect of the woods.

I gave this film 4 and then 5 largely because i think it over rated the rites it portrayed but also then to acknowledge the bravery of the degree of nudity the actors were prepared to give of themselves. With regards the acting, it was difficult to give credit where it might be due, largely because of an absence of a script of any notional interest. The film was heavily reliant on a kind of ‘pure’ cinema with a stripped down plot mostly concerned with manifesting emotional tension above all else. 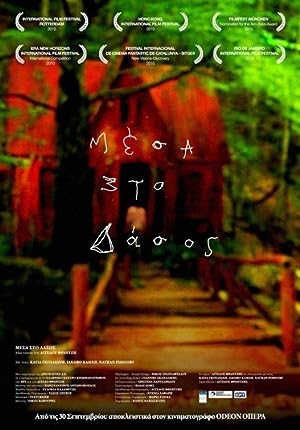 In the Woods (2010)
97 min|Drama, Mystery, Romance|30 Sep 2010
4.4Rating: 4.4 / 10 from 222 users
Enormous tree trunks. The nature of leaves, the roots of desire and a house hidden deep in the forest. A journey to the other side. Something like a "punk" existential fairytale.
Director: Angelos Frantzis
Creator: Angelos Frantzis
Actors: Katia Goulioni, Iakovos Kamhis, Nathan Pissoort