While Philipe waits for Johan to come out of jail he starts recreating several moments of their relationship with the help of several friends during the summer of 1975.

An early 16mm effort by renowned French gay filmmaker Philippe Vallois, it would be unfair to judge this as it turns out supremely self-indulgent work by the same standards one applies to his later and far more polished productions, the best known of which are the moving wartime melodrama NOUS ETIONS UN SEUL HOMME and his naughty noir send-up HALTEROFLIC a/k/a RAINBOW SERPENT. JOHAN is typical of early ’70s Continental art-house fare in that it was made to express the voice of but one man – the director’s – with additional characters introduced for the sole purpose of roles occupied within the filmmaker’s life. While this might reek of navel contemplation, it must also be seen as a product of the times. Even for those who could care less about the man in question, this remains a historical document of considerable importance, vividly registering a moment in time within gay life and culture, post late ’60s liberation and prior to the advent of AIDS.

Quite literally a film in search of its main character, JOHAN details the director’s quest for an actor to play his titular lover, the real deal having been incarcerated just prior to shooting on charges of petty theft. Stylistically, the movie initially seems all over the place, switching from black and white to color, stark realism to campy flights of fancy and with the filmmaker not only appearing as himself but somewhat confusingly casting a pair of cruising hustlers (one shot Georges Barber and Patrice Pascal, who appeared in Jean-François Davy’s seminal soft porn classic BANANES MECANIQUES) as alter egos. Gradually, Vallois develops a method to his madness, cutting through the frills and flourishes to arrive at a core of youthfully wide-eyed romanticism, undeniably dated three decades down the line yet also extremely touching in its sincerity devoid of the cynicism that was to cloud the communal cerebellum through the passage of time. As was often the case with pioneering gay erotica, this mood is underlined with heavy classical music, in this case the compositions of Austrian Anton Brückner whose work was perhaps most effectively employed in Luchino Visconti’s haunting SENSO with Alida Valli.

Occasionally playing himself, struggling cinema auteur Philippe Vallois takes a tour of the legendary homo haunts of Paris circa 1975, prowling the bars, bath houses, public toilets and the once notorious for its rampant round the clock cruising Tuileries Gardens in an attempt to secure a vacant facsimile for his absent lover in the film he’s about to make, only to be disappointed at every turn. That’s the premise, elaborated upon with interviews either candid or fabricated – only the director knows for sure and he leaves the matter tantalizingly up in the air – with friends and family members, including his delightfully open-minded mother and giggly girlfriend Marie-Christine Weill, who had a bit part in Max Pécas’ obscure LA PEUR ET L’AMOUR and does a defiant and unexpected full frontal nude scene here. Juggling formats and film stock, the movie acquires texture in a groundbreaking coming of age (and, personally, out of the closet) effort by talented DoP François About who could easily have gone mainstream but elected to remain ensconced within pornography, his collaborations with Francis Leroi and Martin Cognito being especially noteworthy. His assistant here was the 18 year old Thierry Arbogast who would rightfully gain formidable recognition as regular camera man to Luc Besson on NIKITA, LEON, THE FIFTH ELEMENT and beyond ! Still further interest added to a peculiar picture long believed lost until its near miraculous DVD resurrection.

In order to fully appreciate the director’s achievement, one should most definitely watch the 2006 documentary entitled JOHAN : SECRETS DU TOURNAGE, helpfully included as an indelible extra on the DVD release. Not only does it feature an extensive interview with Vallois, helpfully situating the work within his own artistic output and French cinema in general, but it also showcases the rediscovered hardcore footage snipped at the time of release, most of which the director chose not to re-instate now that his yearning to provoke has waned with age. Though bereft of its more graphic shots, the sex is still clearly not simulated on most occasions yet most of the performers were actually recruited by Vallois among the City of Lights’ denizens of the night and chose not to actively pursue a career in pornography. Chief exception was Karl Forest (billed under what might be his real name “Jean-Paul Doux”) who appears as a hunky Foreign Legionnaire in a prototypical desert fantasy sequence and was of course the star attraction of American Wallace Potts’ quintessential LE BEAU MEC. His is but one of many candy-colored diversions, pre-dating the kitsch-embracing photographic illusions of Pierre & Gilles, liberally sprinkled throughout the freewheeling narrative, not so covertly referencing Jim Bidgood’s gay identity defining PINK NARCISSUS. 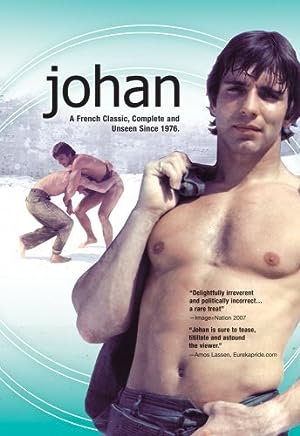