Ironsides is a story of two boys, each trying to win their father’s affections – one by fighting, and one by seeking peace. 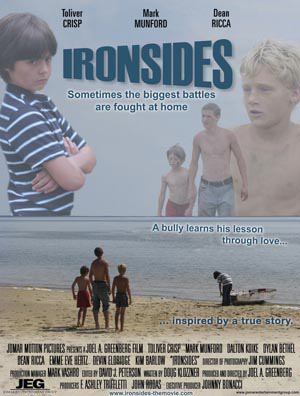 Abuse, neglect, hatred, war, fighting, and bullying are not new to our society but seem to have escalated over the past few decades. Jomar Motion Pictures and writer/director Joel Greenberg addresses these issues and more in his film called Ironsides, driving home a clear message that

While I’m mostly drawn to big box office feature films, I am also an Independent film buff.  While most “Indies” are made with a much lower budget and sometimes even supported solely by donors, my approach to (and expectation from) these films is much different than for those that Hollywood pumps out while spending millions of dollars and utilizing hundreds of professionals.

In my personal e-mail exchange with Director Greenburg, I found that while nearly all of the actors who played in this film were right off the street with no formal acting experience, some of the leads did have more acting background and experience.

Toliver Crisp was, for the most part, quite skillful in his portrayal of eleven-year-old Randy Scott. Randy is a decent kid who spends much of his time doing his best to lay low from a family of brothers who constantly terrorize him and bully him enticing him to fight or, as they put it, battle!  Randy’s father,  played by actor Devin Eldridge, also did a good job in his scenes with Crisp, bringing out a very loving, mentoring father/son relationship and helping to establish the driving force in the film – Peacemaking.

While the father spent most of his time away from his son working as an exhibition boxer, when he was home he would encourage his son not to fight, explaining that his boxing was a job and actually one he hated.  It seemed that it would only take one more bout and the family would be reunited forever with his retirement from the sport.

Meanwhile, on the other side of the community, there lived a family of three boys: Simon, Mike & Jimmy Coltrain. These boys lived in an environment of continual fear and abuse brought about by a father who was a delusional drunkard.  One scene substantiated that he may have been suffering from PTSD (post traumatic stress disorder).

Unlike Randy’s father, who encouraged his son not to fight, these boys lived under a militant rule, forced to lift weights and exercise, and encouraged to go out and battle every day.  If the boys would lose or come home with an injury, they would be further beaten and abused.  In order to survive the boys had to play the part.

While some of the scenes were not as convincing as others, young Dalton Koike (who played Simon) was the standout actor among this batch of sibling brothers.  While maybe not as experienced in acting, he carried his role very well as Ironsides – the boy who could take the punches.

While attempting to prove himself as a tough boy, even in an early scene, Dalton skillfully portrayed a quality of disbelief that he really wanted to be this character that his overbearing father was forcing upon him.

The film does offer some scenic footage but, for the most part, it’s quite simply made. The story itself is the strength of Ironsides.

On the down side, I did find some of the music a bit distracting, with a piano chord played over and over in a couple of scenes in the film. At times it was also too loud, to the point of overpowering the dialog between actors.

However, the music at the end of the film was very fitting. My only wish is that they would have used this music more throughout the film.  I also noted a few special sound effects that seemed not to fit in the film – like the sound of a motorcycle racing by while the small street outside could never have accommodated this event.

Some of the boys’ short fighting scenes were a bit unconvincing, while a few others were better.  These boys were all quite young and I also felt their use of a few minor expletives, while not necessarily inappropriate, were unconvincing coming from them.

These scenes actually could have been made without using the strong language. Overall, I think the film could have been even shorter – cutting much of the Fourth of July Carnival scene and leaving only the important scenes with the two leads doing their singing act.  Using that many inexperienced actors just did not add value to the film and made it a bit like watching a home video.

Overall, I still think the film is worthy of viewing and Director Greenburg should be praised for his outstanding effort to bring us this amazing story.