After 12 years of absence, Louis (Gaspard Ulliel), a writer, goes back to his hometown, planning on announcing his upcoming death to his family. As resentment soon rewrites the course of the afternoon, fits and feuds unfold, fuelled by loneliness and doubt, while all attempts of empathy are sabotaged by people’s incapacity to listen and love.

I think this film is definitely not as bad as the publicity and the buzz from the film festivals would lead one to believe. I think it still carries a lot of Dolan’s trademark cinematic flourishes. But I also think they exist in this film to a very distracting degree. The screenplay lays the foundation for some very interesting character dynamics, but it seems as if they never really come to fruition and all we have are very barebones approaches to what should have been a great film. The cast surely gives it their all, even when the material really isn’t helping them. Some of the camera-work and music choices are also a bit baffling. It’s not bad and there are noteworthy aspects, but it’s a great disappointment. 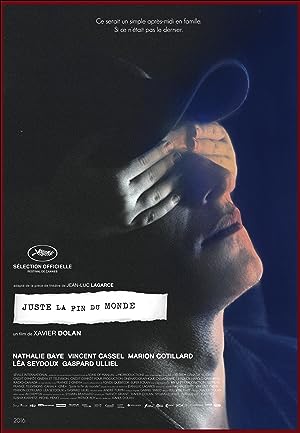 It's Only the End of the World (2016)
97 min|Drama|30 Jun 2017
6.9Rating: 6.9 / 10 from 17,579 users
Louis (Gaspard Ulliel), a terminally ill writer, returns home after a long absence to tell his family that he is dying.
Director: Xavier Dolan
Creator: Xavier Dolan (screenplay by), Jean-Luc Lagarce (based on play by)
Actors: Nathalie Baye, Vincent Cassel, Marion Cotillard, Léa Seydoux