During World War II, 12-year old Ivan works as a spy on the eastern front. The small Ivan can cross the German lines unnoticed to collect information. Three Soviet officers try to take care of this boy-child.

Tarkovsky’s monochrome delight deals with the tragedy of youth lost in war. Its main theme is of childhood innocence lost (becoming accessible to Ivan only in dreams) however the young officers are also vastly aged by the conflict they find themselves in.

The backdrop is nature itself – woodpeckers and cuckoos emulate (or become replaced by) the sounds of machine gun fire and the hoots of the falling flares. It pervades most scenes: the seemingly endless channel of water between the opposing sides, the huge birch trees stretching out as high and as far as the eye can see while also providing bunkers for the Russian forces. But nature’s power is continually challenged by the great war going on around it and is ultimately defiled and devastated (like Ivan’s, and the other young officers’ innocence) – turning from green grasslands to mud and ashen trees.

Reminded me of ‘The Thin Red Line’ in its use of the natural world war tries to ignore. The shots are honestly stunning. The leads are all fantastic. Enjoy the desolation. 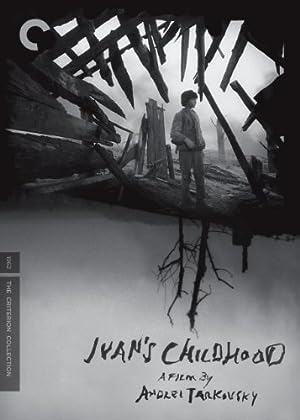