Jacquot Demy is a little boy at the end of the thirties. His father owns a garage and his mother is a hairdresser. The whole family lives happily and likes to sing and to go to the movies. Jacquot is fascinated by every kind of show (theatre, cinema, puppets). He buys a camera to shoot his first amateur film… An evocation of French cineast Jacques Demy’s childhood and vocation for the cinema and the musicals.

This film, Agnes Varda’s loving tribute to both Jacques Demy and to the playful joy of cinema, is a great idea executed with a beguiling sincerity and containing some wonderful moments that make up for it’s flaws and that make the film very worth seeing.

Concentrating on Demy’s childhood in working class France of the 1940’s, the film often doesn’t quite go far enough into absorbing us into it’s world. It can be sketchy at times. Just about all of the characters other than the young Demy are blurry and weak. The details of the time and place are often sparse in a way that distances. When World War II begins, we would hardly know it if not for a few minor mentions of it as well as a brief, unconvincing moment involving a German soldier wandering his way into the scene of a family gathering. We don’t quite get a vivid enough impression of where Demy comes from.

However, all of this doesn’t matter during the wonderfully funny, charming scenes of the young Jacques making his first films. The scenes of his working on a stop-motion animated film set in a cardboard city he builds in his basement are particularly witty and fun to watch.

The film also contains some most valuable footage of Demy himself reflecting on the past and, to sometimes charming effect, the film intersperses several clips from his films (The Pied Piper, Lola, Umbrellas of Cherbourg) throughout, highlighting the influence of childhood memories on his later work.

Jacquot is recommended. It makes you want to see again (or see for the first time) the films of Jacques Demy and most anyone who has had their life taken over by cinema will be able to pick out the most innocent, inspiring parts of themselves out of the film’s better moments. 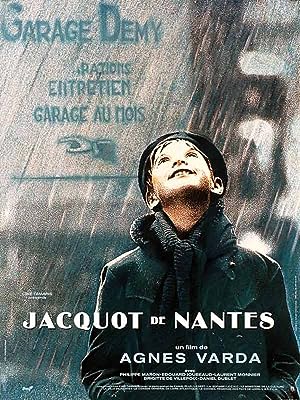 Jacquot de Nantes (1991)
118 min|Biography, Drama|25 Jun 1993
7.6Rating: 7.6 / 10 from 995 users
Jacquot Demy is a little boy at the end of the thirties. His father owns a garage and his mother is a hairdresser. The whole family lives happily and likes to sing and to go to the movies. …
Director: Agnès Varda
Creator: Jacques Demy (memoirs), Agnès Varda
Actors: Philippe Maron, Edouard Joubeaud, Laurent Monnier, Brigitte De Villepoix