Seven-year-old Sang-woo is left with his grandmother in a remote village while his mother looks for work. Born and raised in the city, Sang-woo quickly comes into conflict with his old-fashioned grandmother and his new rural surroundings. Disrespectful and selfish, Sang-woo lashes out in anger, perceiving that he has been abandoned. He trades his grandmother’s only treasure for a video game; he throws his food and he throws tantrums. When Sang-woo’s mother finds work and finally returns for him, Sang-woo has become a different boy. Through his grandmother’s boundless patience and devotion, he learns to embrace empathy, humility and the importance of family.

i am not an easy sell on movies. many things can strike a sour note and put me off a little bit. but i rate this movie 10 on every count. it is excellent in story, characterization, cinematography–but all of those words pull me away from what i truly want to say about The Way Home. it is beautiful on a level that few movies are. most movies that attempt the type of emotional beauty that this one does end up a bit cheesy, a bit cliché, and i am not able to take them seriously.

The Way Home simply lays out the struggle of a young boy and the quiet resilience of his grandmother, and here weeks later when i think of it i feel joy. 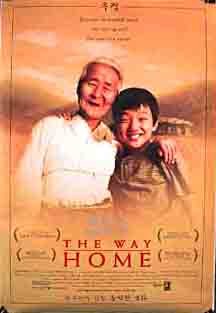 The Way Home (2002)
80 min|Drama|05 Apr 2002
7.8Rating: 7.8 / 10 from 4,526 users
Seven-year-old Sang-woo is left with his grandmother in a remote village while his mother looks for work. Born and raised in the city, Sang-woo quickly comes into conflict with his …
Director: Jeong-hyang Lee
Creator: Jeong-hyang Lee
Actors: Eul-boon Kim, Seung-ho Yoo, Hyo-hee Dong, Kyung-hyun Min