A Taiwanese boy joins gymnastics at school and has talent for it. His mother forces him to stop and help with the family business. He goes on a downward spiral of fighting etc. Hitting rock bottom he decides to pursue his dream again.

Jump! Ashin is an interesting, yet unbelievable film that is apparently based on a true story. Still there is a lot to like about this film. Firstly, the two lead actors are extremely likable in the form of the bulked up Eddie Peng and the scene stealing entertaining display from rising star Ko Yue-Lun. Secondly, from start to finish, the film is extremely well-meaning and the good news is that it entertains as well. Finally, the director being the brother to the real-life Ashin, adds an extremely personal touch to the proceedings and the result is a heartfelt finale that wins over the audience’s hearts.

Eddie Peng is easily a likable character and as a title character Ashin, Peng puts in a career best display and carries the film with a strong touch. The fact that the finale can be so touching just goes to show the effort both Peng and the director puts into the character development to a level the audience can relate and feel. Likewise Ko Yue-Lun simply steals the show as Ashin’s sidekick. His conflicted emotions in display as well as being a drug addict further enhance his ability as an actor in probably the most difficult role in the film. Although, Zaizai Lin’s screen time is kept to a minimal, but Lin was simply irresistibly sweet and the manner she manages to extend from her page thin role, just goes to show the potential of her acting ability. Another actress to stay in touch with and certainly can do so much more in a meatier role.

All in all, Jump! Ashin does feels like a payback to Hong Kong late 80s cinema. From the Jackie Chan’s style fight scenes to the Dave Wong’s classic songs about after love and a clear cardboard cut of scene from As Tears Goes By, Jump! Ashin reminds us of the glory days of HK cinema. With films like “You are an Apple of My Eye” and now this, Taiwanese cinema is making a strong statement. Despite the numerous exaggerated subplots and events, the film ultimately finishes extremely strongly and ends on a positive note. If you are able to go out of this film unaffected, then you are either emotion-less or you have slept for the whole duration. I have always got soft spots from films that can inspire, emote and embrace the audience along the ride. Jump! Ashin succeeds by going back to the basics and as clichxc3xa9 as the story may seem, there is no doubting that this is a good film to boot 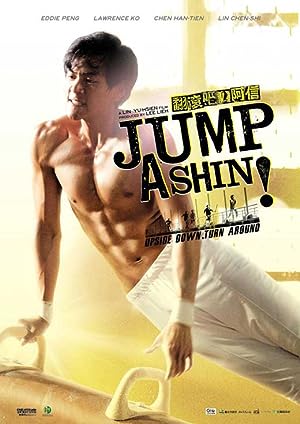 Be the first to review “Jump Ashin! 2011 with English Subtitles” Cancel reply