When David, a troubled high school student who appears to suffer from mental illness, finds himself in a situation where he is about to be taken captive for reasons unknown, a dark power takes over his body opening the doors to a world of superhuman abilities and a past kept secret.

A young man with hidden abilities goes on the run from attackers in Kill Order. David Lee (Chris Mark) is a troubled teenager living with his “uncle” Andre Chan (Daniel Park). One day while David is school, a group of armed men storm David’s classroom. This seems to awaken something within David, giving him deadly fighting skills. Terrified at what he can do, David ends up going on the run, pursued by various “subjects” controlled by the mysterious Yin (James Mark).

Originally going on the title of Meza, Kill Order is a sci-fi/action film made by writer/director James Mark and his friends in the stunts community. Sporting superhuman fighting skills, as the result of top secret experimentation, David Lee goes on the run from the secretive organization that made him the way he is. Along the way, he is attacked by the other subjects of this program, leading to some spectacular and bloody action.

With a plot that I can describe as “The Bourne Identity meets Mortal Kombat,” Kill Order is a film, in which the plot only really serves to move from one fight scene to the next. However, the highly choreographed and violent fights are incredibly entertaining to watch, with the film featuring some unbelievable moments. While the film ultimately ends with an unresolved ending hinting at a possible sequel, Kill Order is still a film that kicks some major ass! 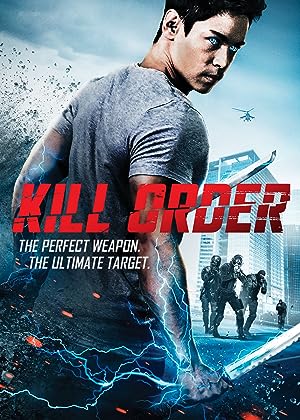 Be the first to review “Kill Order 2017” Cancel reply